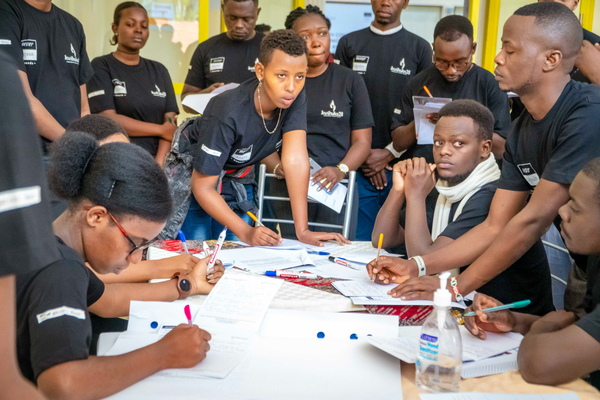 Today Never Again Rwanda hosted a national youth conference on commemoration policy and practices of the 1994 Genocide against the Tutsi organized under the theme “Remember Unite and Renew: My story, your story, Shaping Our Future”.

The one-day conference attracted over 150 youth from diverse backgrounds to share their stories and experiences in order to develop an understanding of the shared common goal of combating genocide ideology, all forms of denial, and hate speech, to shape a unified society.

Through plenary discussions, group work, performances and breakout sessions, youth expressed their desire to preserve memory and share their experiences through different platforms. One participant noted, “We stand before you, as evidence that the Genocide against the Tutsi happened and that all our efforts are needed to deal with its consequences and to fight genocide ideology and denial”.

In his opening remarks, our Executive Director of Never Again Rwanda, Dr Nkurunziza Joseph Ryarasa encouraged youth to use available platforms to learn more about our history and take part in spaces that foster constructive dialogue. On the other hand, Dr Assumpta Muhayisa on behalf of the Ministry of National Unity and Civic Engagement noted that the 1994 genocide against the Tutsis had a severe impact on youth and urged them to seek support while contributing to combating genocide ideology.

One of the key highlights of the conference emphasized was the need for collective efforts to fight against Genocide ideology, creation of spaces for intergenerational dialogue and ensuring healing and reconciliation is a top priority as a strategy to foster a unified society.

Never Again Rwanda is a Rwandan peacebuilding and social justice non-governmental organization that was established in 2002, in response to the 1994 Genocide against the Tutsi. Never Again Rwanda organized this conference for the 11th time to rally for the same cause.

During the 1994 genocide perpetrated against the Tutsis youth were manipulated into committing crimes against humanity; in the present Rwanda youth play a vital role in the reconstruction of peace processes in the post-genocide Rwanda.

However, the majority of youth who were born after genocide are not informed on the Rwandan history and most especially genocide history and factors that contributed to the 1994 genocide perpetrated against the Tutsis.

This conference gives a platform to the Rwandan youth and other key stakeholders to discuss the national practice of Genocide commemoration and provide relevant recommendations that may inform the policy and decision-making process. (End).