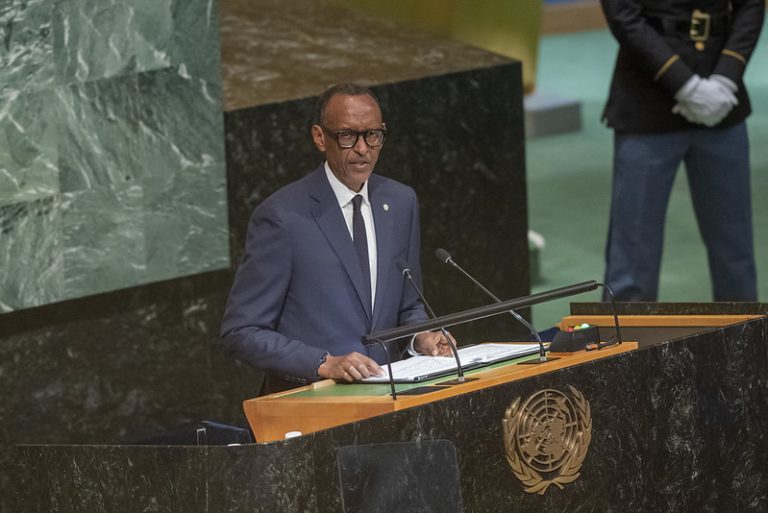 Referring to a world in a state of turbulence, President Paul Kagame of Rwanda on Wednesday called for multilateral cooperation and efforts to address intersecting crises, including climate change, food price inflation, conflict and migration.

The Secretary-General’s landmark report Our Common Agenda has only grown in value since it was launched one year ago. But he cautioned that the perception that the international system is no longer up to the task has only deepened.

Despite shortcomings, he flagged that global health was an example that demonstrated how international cooperation can successfully address “the issues that matter to all of us.”

In his address to the annual high-level debate in the UN General Assembly, Mr. Kagame paid tribute to the Global Fund to Fight Aids, Tuberculosis and Malaria for saving countless lives in Africa and beyond, while also strengthening health systems.;

To increase African’ resilience against future pandemics, he flagged that “external funding must go hand in hand with increased domestic financing for health.”  He cited the efforts under way to work with partners to bring vaccine manufacturing to the continent.

The blame game does not solve problems

The Rwandan President cited the security situation in the eastern Democratic Republic of Congo (DRC), which has exposed neighbouring states to cross-border attacks that are “entirely preventable.” Advocating for the political will to find and address the root causes of instability in eastern DRC, he stated that “the blame game does not solve problems”.

He also expressed support for regional initiatives as a way of complementing UN efforts to deal with counterterrorism and peacebuilding, citing successful efforts in this regard in the Central African Republic and to contain violent extremism in northern Mozambique undertaken by Rwanda and the Southern African Development Community (SADC).

The future is digital

He commended the decision to hold the Transforming Education Summit, underlining his view that the future of billions of children and young people across the world depends on overcoming the challenges of inclusion and the quality of education as the world recovers from the pandemic.

Mr. Kagame went on to call for public-private partnerships to create jobs for young people across the continent and equitable investment in emerging technologies such as artificial intelligence. “The future is digital,” he stated, advocating for high quality digital jobs as a practical response to irregular migration and to close the income gap between rich and developing economies. (End)