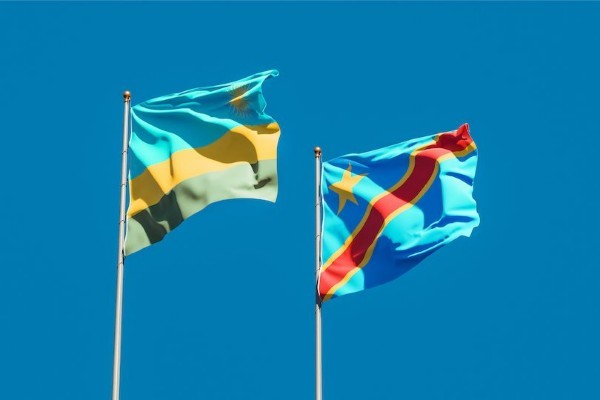 Clearly, some people are conspiring to damage Rwanda and the Democratic Republic of the Congo’s rapprochement, and the efforts of the two nations’ Presidents at collaboration in mutual security and stability.

On March 28, 2022, the Spokesperson of the governor of DRC’s North Kivu province, Brig Gen Sylvain Ekenge, called a press conference and accused the Rwanda Defence Force (RDF) of supporting a rebel group named the March 23 Movement (M23).  He claimed it had «carried out incursions and attacked Congolese Armed Forces (FARDC) positions in Tchanzu and Runyoni, in the Rutshuru territory. »

The two men, dressed in civilian clothes, and standing near him were shown on Congolese television.

The Governor of Rwanda’s Western Province, François Habitegeko, refuted “the baseless accusations” from the spokesperson of North Kivu Province.

Habitegeko said the same two names were mentioned by the Congolese Military and Intelligence Delegation during the DRC¬ Rwanda bilateral meeting of the Joint Intelligence Teams held on February 25, 2022 in Kigali.

He noted that: “The Joint Intelligence Teams were not subsequently allowed to interrogate those individuals for a Joint Assessment as is the practice.”

Habitegeko noted that the Rwandan military does not have any members with the names presented in the statement by the spokesperson for the North Kivu Governor.

He said the allegations are “an attempt to manipulate the opinion by presenting two individuals arrested under obscure circumstances” more than one month after elements captured in fighting on March 28.

On the evening of the same day, the DRC Government spokesperson, Patrick Muyaya, appeared on a French TV and, referring to the “assertions of the [DRC] army”, he said “it is time to put an end to this form of hypocrisy or this form of complicity between the M23 and the government of Rwanda.”

“My colleague of Foreign Affairs will invite the ambassador of Rwanda, so that he comes to give us explanations.”

He said: «Rwanda does not support the M23, neither politically nor militarily.” Amb Karega reaffirmed Rwanda’s commitment “for verification and joint cooperation in relation to those accusations. »

As demonstrated by the Government of Rwanda, besides the fact that RDF did not have any soldiers with the names mentioned, the two paraded men were arrested “more than a month ago,” and have been in detention long before Monday’s attacks.

In a report by Jeune Afrique, on March 29, 2022: “DRC-Rwanda: the confidential report of DR Congo’s intelligence on the M23 rebels”, it was revealed that the FARDC communication reportedly generated unease at the highest level. An inside source said that, «it’s a situation that embarrasses us and even embarrasses the president. There will be sanctions, » said the same source.

These hurried and unverified accusations against Rwanda exposed some people’s plot to harm the DRC – Rwanda rapprochement and Presidents Tshisekedi and Kagame’s efforts to strengthen bilateral cooperation, a regional analyst has observed.

“More specifically, the sabotage seems to operate in the military ranks by providing false and fabricated military intelligence,” he said.

When the rebel group launched attacks nearly four months ago, the Rwandan military spokesman said allegations that it was Kigali behind their resumed attacks were false propaganda aimed at spoiling the good relations between Rwanda and the DRC.

Kigali never ever denied having a relationship with the M23 rebels.

In 2013, after fleeing to Rwanda, the M23 rebels were disarmed and secured in Rubavu district, near the border of the DRC.

But knowing the danger they could pose, about two weeks later, Kigali relocated the group of about 680 M23 fighters to the country’s Eastern Province, far away from the Rwanda-DRC border.

Kigali was doing its best to abide by international norms which dictate that in a situation where armed rebels cross into a country, they must be relocated to a place far from the borderline of their country.

Fact, however, is that while the group that sought refuge in Rwanda was disarmed, and accounted for, not much the same can be said about the group that fled to Uganda.

Worse still, President Tshisekedi seems to be faced with issues more serious than the false accusations against Rwanda.

He will have to cope with sabotage and political coalitions that express contempt for their leader and loom as the most insidious betrayal of his Presidency. (End)