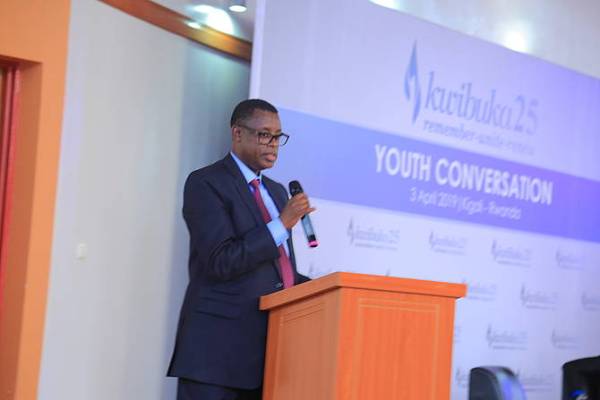 While officiating at the closing of a one day youth conversation organised in line with the 25th commemoration of the genocide against the Tutsi, dubbed Kwibuka25 Youth conversation, in Kabuga, Gasabo District, Gen. James Kabarebe, Senior Advisor in the Office of the President urged more than 2000 youth representatives to combat genocide ideology.

He said “The first enemy of Rwanda is Genocide ideology and anything that would bring back divisionism in the country”, calling the youth to make sure that they fight for unity of Rwandans.

“As we get busy discussing how to safeguard the country’s achievements and how to move forward, we should keep in mind that some people are still busy promoting genocide denial. We should fight it to ensure that Genocide never happens again. If the force that stopped the Genocide against the Tutsi did not have the highest moral authority, Rwanda would not be where it is today”, he added.

“You have a challenging task of building the country but you have where to start. You are equipped with all the necessary tools of analysis. We used to be united before the colonisation. We know the benefits of unity and we have seen the consequences of losing it. Without choosing unity, Rwanda would have remained in the darkness”, he reminded the youth.

The Kwibuka25 Youth Conversation which was organized by the Ministry of youth in collaboration with the National Commission for the Fight against Genocide (CNLG) and other stakeholders is one of a series of events that are designed to prepare the youth towards the 25th commemoration of the genocide against the Tutsi in 1994.

It is a reflection session that will give young people a chance to learn about the 1994 Genocide perpetrated against the Tutsi, the choices the nation has made post the genocide to reconcile and rebuild on the foundation of a shared identity – Ndi Umunyarwanda. The young delegates learnt about Rwanda’s journey fighting for justice and against any forms of genocide ideology.

This platform was a place for the youth to remember without being held by their past, unite in vision, purpose and positive values and renew their commitment to unity. Through a series of thorough conversations.

Dr Augustin Iyamuremye, the head of Rwanda Elders Advisory Forum (REAF) who explained how the first and second republics failed to build the nation, and instead taught hate and discrimination urged the youth to take advantage of the chances on their disposal including the unity of Rwandans and the visionary leadership that is eager in building and sustaining a united nation. He was among the panellists that spoke about having a national identity, together with Dr Abdallah Utumatwishima and Captain Walter Kageruka, representative from Rwanda defense Forces (RDF).

The youth got a chance to learn from their elders and converse with one another positive values, ethics, stewardship of our history and civic responsibility.

The panel discussion on Sustaining Rwanda’s growth, which was animated by Sheikh Abdul Karim Harerimana, member of REAF, Israel Bimpe, head of Zip line National Implementation, Yvette Ishimwe, founder and CEO of IRIBA WATER GROUP and Regis Rugemanshuro, the chief Digital Officer at Bank of Kigali concluded with the youth being challenged to do their best to safeguard the country’s achievements and get actively involved in the country’s transformation.

Earlier in the day, while opening the conversation, Rosemary Mbabazi, Minister of youth had urged the contemporary youth to differ from the youth that was used to perpetrate the Genocide against the Tutsi.

A total of 217 youth representatives including the youth from Higher Learning institutions, National Youth Council coordinators, young professionals, young entrepreneurs and youth leaders among others. (End)