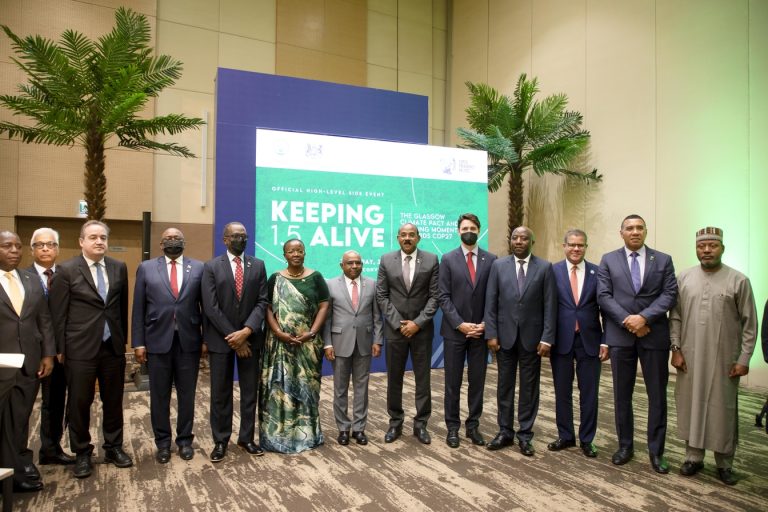 The Governments of Rwanda and the United Kingdom together with the Presidency of the United Nations Climate Change Conference (COP26) have hosted a high-level meeting to discuss ways the Commonwealth Heads of Governments can influence climate change interventions.

The meeting – which was a side event of the Commonwealth Heads of Government Meeting (CHOGM) hosted by Rwanda from 20th to 25th June 2022 in Kigali – took stock of COP26 outcomes, especially progress on the Glasgow Climate Pact and discussed innovative ways to access climate finance, including an introduction to the Kigali Principles on Carbon Finance.

The side event dubbed “Keeping 1.5 Alive – The Glasgow Climate Pact and Building Momentum towards COP27” also aimed to generate momentum for COP27 which will take place in Egypt in November 2022.

It brought together a range of leaders from across the Commonwealth, UN organisations, civil society, the private sector, young people and women to discuss progress on the Glasgow Climate Pact, accessing climate finance, the desired outcomes of COP27 in Egypt and how Commonwealth Member States can work together to achieve them.

Rwandan Minister of Environment, Dr. Jeanne d’Arc Mujawamariya shared a story that illustrates why Rwanda has put the environment and climate change at the heart of everything, and reminded that leaders have to make hard but necessary choices to keep the 1.5-degree goal alive.

“On Christmas Eve in 2019, Rwanda experienced a terrible rain storm. The intensity and amount of rain that fell left roads flooded, bridges destroyed, houses demolished and crops washed away. Just two weeks earlier, the government had made the difficult decision to relocate people living in wetlands, especially here in Kigali” Minister Mujawamariya explained.

She added that “At the time, there was understandable concern about the impact on those who had been living in these high-risk zones. But what happened on Christmas Day was a sober reminder that the devastation could have been much worse if the government had failed to take decisive action. Many hundreds of lives were saved because of that difficult decision”

Minister Mujawamariya reiterated that such experiences led Rwanda to take climate change seriously and do something about it. These decisions, she added, would not have been possible without strong political will and leadership, as well as clear policy goals.

At Glasgow all countries agreed to revise and strengthen their Nationally Determined Contributions.  G20 nations account for 80% of global emissions and their leadership is needed more than ever to bend the global emissions curve towards 1.5, according to Amina J. Mohammed, the Deputy Secretary-General of the United Nations.

“Today we have heard that there is political will behind the Glasgow Climate Pack, and renewed commitment to deliver the Paris Agreement. But this intent is not translating into action” she said.

She added that “the battle to keep the 1.5-degree goal of the Paris Agreement alive and prevent the worst impacts of the climate crisis will be won or lost this decade. With each passing day of inaction, the pulse of the 1.5-degree goal gets weaker and weaker”

Rwanda’s Prime Minister, Edouard Ngirente reminded Commonwealth governments and business leaders, gathered at the CHOGM high-level side event on climate change, of the need for innovative ways to access climate financing and carbon market to achieve our goals.

“There is a lot Commonwealth Member States can do together to achieve the goals of the Paris Agreement. Many Commonwealth members, particularly developing states, are especially vulnerable to a warming world.  The larger economies are major emitters, and have much work ahead to reduce emissions,” he said.

He said that this puts the Commonwealth in a unique position to work together and deliver a common future that is clean, green and climate resilient.