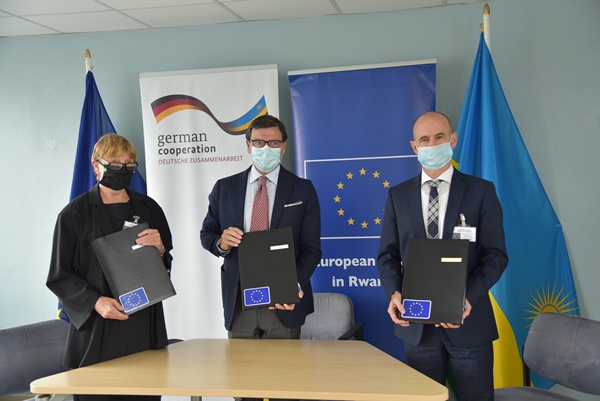 Today, EU Ambassador to Rwanda, Nicola Bellomo; Dorothea Groth, Head of Cooperation at the German Embassy in Kigali; and Country Director for the Deutsche Gesellschaft für Internationale Zusammenarbeit (GIZ) GmbH , Martin Kraft, gathered to sign an agreement that marks a “green alliance” between the European Union (EU) and GIZ Rwanda under the Global Climate Change Alliance Plus Initiative (GCCA+).

The EU’s flagship climate programme GCCA+ is providing EUR 5 million as funding to the “Reducing Climate Impact of cooking in Rwanda through improved cooking systems (ReCIC)” project, which will run until 2025. The project targets to not only to protect the country’s famous rainforests but to improve the health of the women who suffer from cooking and living in homes often filled with toxic smoke.

“We are proud to support, as Team Europe, the government of Rwanda ambitions in terms of biomass energy. Focusing on clean cooking is a game changer: it allows simultaneously addressing issues of public health, deforestation and climate change, while offering a significant potential to create jobs”, said Nicola Bellomo, EU Ambassador to Rwanda.

Six out of ten households in Rwanda rely on the simplest cookstove, made by placing a pot on three stones positioned around a fire. Besides, about 79.9% of households use firewood as their primary cooking fuel. Countless women and children therefore still suffer from the daily drudge of collecting firewood and cooking on smoky, unhealthy fires.

The Federal Ministry for Economic Cooperation and Development (BMZ) also committed additional funding to the ReCIC project, led by GIZ’s Energising Development (EnDev). EnDev has worked in Rwanda since 2006 to support sustainable energy access in close cooperation with the Government of Rwanda. ReCIC aims to dramatically increase the production, availability and use of improved cookstoves (ICS) across Rwanda by increasing capacities of local producers, enhancing consumer awareness on the advantages of ICS and supporting the development of distribution channels for ICS and alternative cooking fuels.

“The Federal Ministry for Economic Cooperation and Development looks forward to intensifying its partnership with the European Union by tackling a pressing development and environmental issue in Rwanda, which is reducing the deforestation in order to preserve the national resources for the generations to come” asserted Dorothea Groth, Head of Cooperation at the German Embassy in Kigali.

“Through ReCIC, the European Union in partnership with GIZ seeks to actively support the creation of a sustainable market for modern cooking services as well as contribute to the GoR’s efforts towards achieving wood supply and demand balance by 2030. The project is as much about preserving the forest resource as it is about providing affordable cooking energy for those who need it most” said Martin Kraft, GIZ Country Director.

The project, through dissemination of more efficient ICS and fuels, therefore seeks to foster more sustainable use of forest resources, as well as address health-related risks due to in-house toxic smokes.

fuels, such as wood pellets, to a rapidly increasing urban population and last-mile communities is a major challenge. With ReCIC, GCCA+ seeks to create the momentum and right platform to promote collaboration between NGOs, local communities, businesses and government institutions in both the forestry and energy sectors to make it happen. (End)