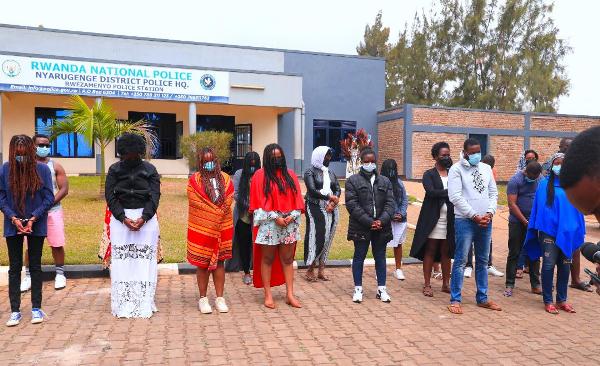 Rwanda National Police (RNP) arrested 25 people on Saturday, July 31, who were at the time holding separate house parties in City of Kigali.

At least 19 people were found in a house located in Nyirabwana Village, Kibagabaga Cell of Kimironko Sector, Gasabo District where one Charles Muzahura, 43, had invited friends to a house party.

Muzahura had invited his colleagues to the party to show them his fiancee.

On the same day, other six people, all employees of Afrimax, an online television channel, were arrested in the house located in Kacyiru, Gasabo District. They include the manager of Afrimax, Aimable Rwandarushya alias Nameless.

All the violators were showed to the media at Nyarugenge District Police Unit (DPU) in Rwezamenyo Sector, on Sunday, August 1.

RNP Deputy spokesperson, Chief Superintendent of Police (CSP) Africa Sendahangarwa Apollo said that during the operation in Kimironko, Police found 13 people gathered in the house dancing and drinking while six others were in the pool swimming.

While speaking to journalists, Muzahura, the party host, could only admit to the wrongdoing and asked for leniency.

On his part, Nameless said that the party had been organized to celebrate reaching one million followers on their YouTube channel. He added that they were 11 although five others managed to escape in the process.

CSP Africa warned against such errant behaviours and attitudes, which derail the national efforts against the Covid-19 pandemic.

“These people knew that what they were doing is prohibited but decided to go on with it, probably thinking that they will not be identified. These attitudes cannot be tolerated and we thank members of the public, who continue to report such risky gatherings in their neighbourhoods, which can be the source for further Covid-19 spread,” said CSP Africa.

He added: “Swimming pool, gym, spas, and parties, as advised by health institutions, are among areas where the virus can spread very fast. Our wish is for all people to adhere to the government directives and health measures to be safe from Covid-19 instead of being arrested and penalized.” (End)