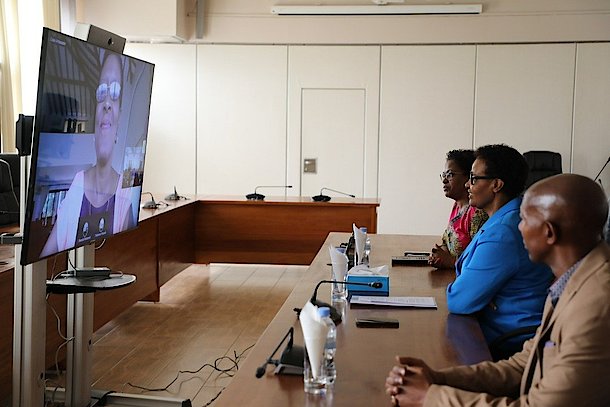 Tania Pérez Xiqués, the Extraordinary and Plenipotentiary Ambassador of the Republic of Cuba to Rwanda with residence in Kampala, Uganda held virtual talks with the President of the Senate Dr Iyamuremye Augustin and the Speaker of the Chamber of Deputies Mukabalisa Donatille respectively.

Their discussions were based on pertinent issues among others to further strengthen bilateral relations and cooperation, and ways to initiate parliamentary collaboration between the Senate, the Chamber of Deputies and the National Assembly of the Republic of Cuba for the benefit of both nations.

On the side of the Senate, Tania Xiqués assured the President of the Senate Dr Iyamuremye that the delegation of the National Assembly of the Republic of Cuba will attend the IPU 145 meeting in Kigali on 11-15/10/2022, and two sides confirmed that a bilateral meeting will be organised to exchange views and explore avenues of parliamentary cooperation.

On the other side, the Speaker of the Chamber of Deputies, Mukabalisa Donatille commended the long-standing good relations between Cuba and Rwanda since 1979, especially in the education and health sectors, and expressed that the Parliament is ready to explore new areas of cooperation.

In addition, Tania Xiqués further mentioned the meeting was very symbolic since it was held on National Rebellion Day on 26/7. She said Cuba and Rwanda have a lot in common, therefore they could learn from each other, and added that creating a friendship group would be an important step. (End).