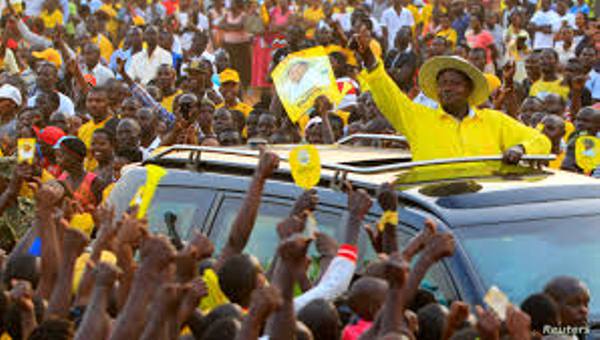 The East African Community Election Observer Mission to the 2021 Uganda General Elections has urged the Electoral Commission of Uganda to consider registering as voters all persons who turn 18 ahead of future general elections.

The mission further urged the Electoral Commission to consider timely accreditation and issuance of accreditation documents to domestic observers to enable effective observation of future elections.

Speaking in Kampala when he presented the mission’s preliminary statement on Uganda’s presidential and parliamentary elections held on 14th January, 2021, the Head of the Mission, Domitien Ndayizeye, who is also a former president of Burundi, further called on the Commission to develop mechanisms of protecting the voting process in the event of adverse weather conditions.

Also making its observations at the same media briefing was the African Union Election Expert Mission to the Ugandan elections that was led by Dr. Samuel Azu’u Fonkam. Dr. Azu’u is also a former chairperson of the Electoral Commission of Cameroon.

Ndayizeye said the commission should also formulate explicit guidelines on the accountability of all polling materials and especially the ballot papers.

The EAC Observer Mission also expressed concern at the shutdown of the internet by the government of Uganda of on the eve of election day saying that this infringes on the freedom and right of access to information as enshrined in the Constitution.

The former president disclosed that the mission was also negatively affected by the shutdown, as its field observation teams could not transmit their findings in time to the mission’s command centre in Kampala.

“The Mission is concerned that its electronic means of transmission of election day observations was hampered by the shutdown of internet on election day. The Mission will therefore give a detailed report on the observation of the election day procedures in the final report,” said the retired president.

The mission urged the Parliament of Uganda to consider legal amendments to regulate campaign financing by introducing disclosure of and ceilings on campaign expenditure as a way of levelling the election playing field.

“We further urge Parliament to consider enactment of regulations to give effect to the use of technology in elections,” said Ndayizeye.

Ndayizeye called on the government of Uganda to review actions taken against opposition parties and candidates when it comes to accessing media houses especially radio and TV stations for purposes of political observation.

“Government should also review performance of the security services in securing the electoral process and address issues, which may have precipitated disproportionate use of force in some instances and accusations of biased enforcement against opposition parties and candidates,” he added.

The Mission recommended to the government to expedite investigations that were underway in order to bring to account all who contributed to injuries and loss of life during the campaign period.

The mission urged all political parties to continue to promote peaceful political competition.

Despite the challenges, the mission noted that the voting day demonstrated the level of maturity expected of a democracy.

“The voting was largely peaceful and no voter intimidation was observed. Voting regulations were by and large adhered to. There were isolated cases of technological failures with respect to the Biometric Voter Verification Kit but these were corrected through manual back-up,” notes the Mission in the preliminary report.

The EAC Election Observers underwent contextual training ahead of field deployment and were deployed equitably to the various parts of the country on 12th January, 2021. They returned to mission headquarters on 15th January, 2021.

In its observations, the AU team led by Dr. Fonkam said that it had taken note of the generally peaceful atmosphere that characterised voting and the high turnout of youth and women in the stations visited.

The AU team urged all stakeholders and especially the political leaders to refrain from any acts of violence that could lead to loss of lives and destruction of property.

“The Mission recognises that elections will come and go but that Uganda and its citizens remain. It also encourages stakeholders to engage in meaningful dialogue at all levels and to pursue any disputes peacefully in accordance with laid down procedures,” said Dr. Fonkam.