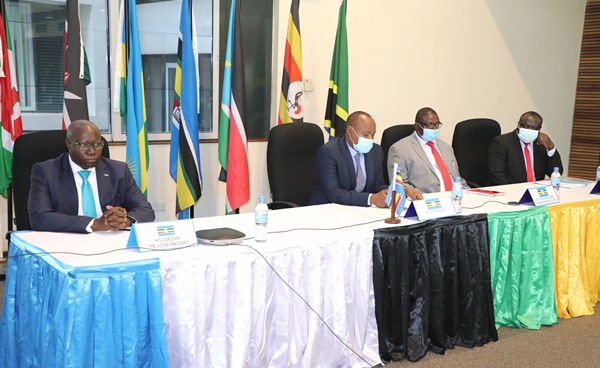 Arusha: East African Community Secretary General Hon. (Dr.) Peter Mathuki, has called upon East Africans to turn out in large numbers as part of collective efforts to contain the spread of the deadly Covid-19 virus the region.

Dr. Mathuki also encouraged those who have been vaccinated to go for booster shots to ensure continued protection against the virus.

Dr. Mathuki said that resistance to vaccines was undermining efforts to jumpstart the regional economy after the damage caused by the virus.

The Secretary General said the global trend was that vaccination certificates would soon be required for travellers and those seeking to participate in meetings and conferences.

Dr. Mathuki hailed EAC Partner States for their on-going effort to integrate their systems with the EACPass, a digital system that would be used to track negative Covid-19 test results and vaccination certificates thereby easing cross-border travel and trade in the region.

The SG who was making his New Year Address to Staff of EAC Organs and Institutions through a hybrid format, said that synergy among EAC Partner States and other stakeholders was the best way to contain the pandemic.

“One of the most gigantic challenges of our time is how to manage our region with the current global pandemic. It is a daunting task to bring everyone on board in addressing Covid-19 related challenges, specifically to have a common understanding and appreciation of the risks, and to comply with preventive, containment and mitigation measures. I encourage that we pull together, notwithstanding that the situation is worsening with the emergence of the Omicron variant,” said the Dr. Mathuki.

“We continue to operate under a challenging environment of Covid-19, which has and continues to affect every organisation and family. As a result of Covid-19, EAC as a region, has lost a number of leaders and citizens,” said the SG.

He praised the East African Court of Justice for celebrating 20 years since its inauguration in 2001.

“The Court held sessions for the first time in a Partner State outside the Headquarters in November, where both divisions conducted sessions in Bujumbura, Burundi. The Court completed its first mediation case involving parties from the Republic of South Sudan, an indicator of the expanding jurisdiction in the alternative dispute resolution mechanism of the Court,” said the SG.

On the Lake Victoria Basin Commission, the SG said that the Commission had in collaboration with the Secretariat concluded negotiations with the Government of the Federal Republic of Germany leading to new financial cooperation projects totalling to 18.3 million Euros.

On the Civil Aviation Safety and Security Oversight Agency (CASSOA), the Secretary General said that the agency had provided technical support to the Partner States to develop Model EAC (Civil Aviation) Regulations and Technical Guidance Materials.

“CASSOA is also working on the finalisation of the Centre for Aviation Medicine in Nairobi, Kenya which will be the centre of excellence on matters of aeromedical standards,” said the Secretary General.

He hailed the East African Competition Authority (EACA) for developing the EACA Outreach and Advocacy Strategy 2021/2022 – 2025/2026, which was approved by SCTIFI and adopted by the Council.

The SG praised the East African Kiswahili Commission for the progress made so far in the adoption of Kiswahili and French as Official Languages of the Community as per the directive of the 21st Ordinary Meeting of the Summit of EAC Heads of State to the Council of Ministers.

“A roadmap for implementing Kiswahili and French as Languages of the Community is being developed. We have already reached out to several development partners who have shown commitment to support these efforts in addition to the promises of our own Partner States,” said Dr. Mathuki.

“The addition of the two official languages and English will open up more possibilities for the implementation of our regional integration agenda with more inclusivity.”

Dr. Mathuki singled out holding the 3rd EAC Regional e-Health and Telemedicine Workshop, Ministerial Conference and Virtual Exhibition in Rubavu, Rwanda as one of the key achievements of the East African Science and Technology Commission in 2021.

For the East African Health Research Commission, Dr. Mathuki disclosed that the Commission had developed a disease surveillance dashboard for the EAC Partner States and the world map health real-time through the EA web portal, adding that the dashboard provides Covid-19 status in real-time in the region.

On the Inter-University Council of East Africa, the Secretary General said that the Council’s biggest achievement was increasing the number of students enrolled under EAC-KFW Scholarship Programme such that there are now 117 EAC nationals pursuing fully funded Master’s degree studies in the fields of Mathematics, Engineering, Informatics, Science, Technology and Business Science outside their home countries within the EAC.

Speaking at the event, the Judge President of the East African Court of Justice, Justice Nestor Kayobera, urged EAC Partner States governments as well as EAC Organs and Institutions to respect the rule of law by abiding with the provisions of the EAC Treaty.

On his part, the Speaker of the East African Legislative Assembly, Rt. Hon. Ngoga Martin, urged the Council of Ministers to move fast to resolve issues that have been hindering the progress of the Community.

Also present at the function were the EAC Deputy Secretary General in charge of the Productive and Social Sectors, Hon. Christophe Bazivamo, his Planning, Infrastructure, & Finance and Administration counterpart, Eng. Steven Mlote, the Director General-Customs and Trade, Mr. Kenneth Bagamuhunda, and the Heads of EAC Institutions.