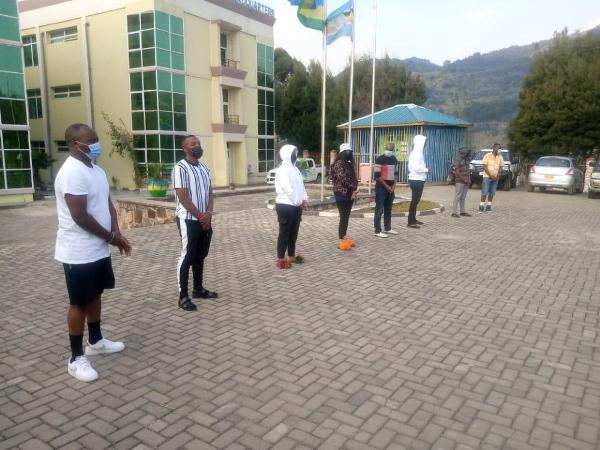 Eight people were arrested Thursday July 29, at a Guest House in Bushyaka, Boneza Sector of Rutsiro District where they were gathered and drinking.

The group include local musicians James Ruhumuriza (King James), William Muhire (K8 Kavuyo) as well as Shadia Mbabazi (Shaddyboo). They were showed to the media this Friday, July 30, in Rutsiro.

The violators cames from different places in Rwanda and abroad, and travelled to Rutsiro on Wednesday, July 28.

Three came from the USA, two from Kamonyi, one each from Nyarugenge, Gasabo and Kicukiro districts.

Rutsiro is among the eleven districts that are under lockdown due to the high rate of Covid-19 cases.

Shadia Mbabazi commonly known as Shaddyboo told the media that although they had a movement permit to travel to Rutsiro, they engaged in social gathering and in big number, contrary to the health guidelines against the spread of Covid-19.

“Although we secured a movement permit to come here in Rutsiro, we admit our inappropriate behaviours to engage in prohibited practices even without knowing our status because we did not test for Covid-19 prior,” Shaddyboo, who asked for forgiveness, told journalists.

King James claimed he was not aware that Rutsiro was under lockdown but admitted they organized a party well knowing that it is prohibited.

Chief Inspector of Police (CIP) Bonaventure Twizere Karekezi, the Police spokesperson for the Western region said Police was called in by residents reporting people, who were gathered in the guest house and making noise.

“When Police officers arrived at the guest house, they found the eight people in one room drinking alcohol,” CIP Karekezi said.

He warned especially the young people against such inappropriate behaviors, which lead to the spread of the pandemic and derail government efforts to combat it. The violators were also fined and tested for Covid-19 at their cost.(End)