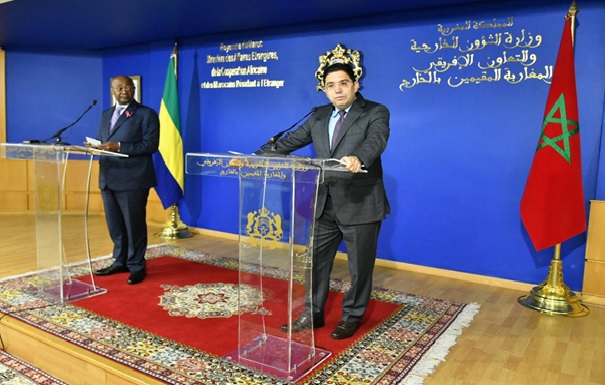 Gabonese Minister of Foreign Affairs, Mr. Pacôme Moubelet-Boubeya, reaffirmed on Wednesday, October 28, 2020, in Rabat, his country’s “unwavering” support for the Moroccanity of the Sahara as well as for the UN-led political process.

“As it was recently expressed before the Fourth Committee of the United Nations General Assembly on this issue, Gabon remains on Morocco’s side, and reaffirms its support for the ongoing political process, which is being conducted under the aegis of the Secretary-General of the United Nations”, said Mr. Pacôme Moubelet-Boubeya at a joint press briefing with Morocco’s Minister of Foreign Affairs, African Cooperation and Moroccan Expatriates, Mr. Nasser Bourita.

Mr. Moubelet-Boubeya also praised “the excellent relations of friendship, fraternity and cooperation” binding the two countries and “the very exceptional relationship” between His Majesty King Mohammed VI and the President of Gabon, Ali Bongo Ondimba, hailing the “diplomatic offensive” led by the Kingdom on the African scene, with more than 53 Royal visits to some thirty African countries, which led to the signing of more than 1,000 cooperation agreements with its African partners.

The Gabonese Minister also underlined the presence of a hundred Moroccan companies in more than 42 countries of the continent, as well as an increase of more than 60% of Morocco’s trade with African countries over the past ten years.