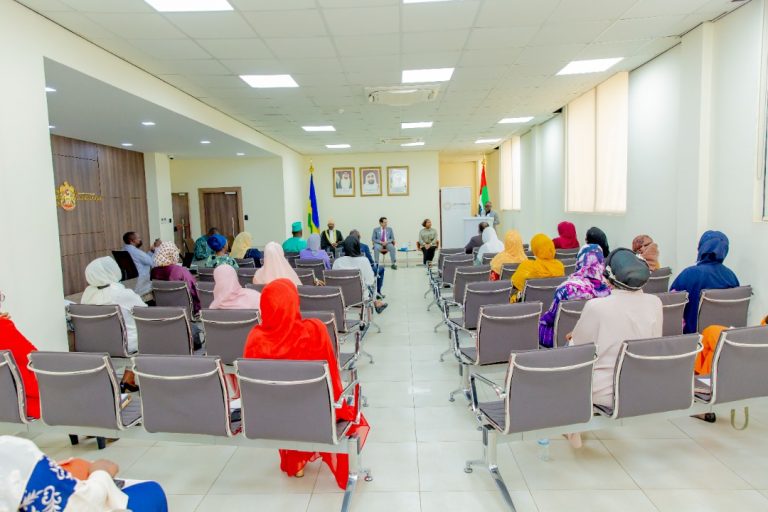  Sheikh Salim Hitimana, I want to sincerely thank you for giving me this opportunity to speak to women leaders from the Rwanda Muslim Community about gender equality & women’s

empowerment in the United Arab Emirates.

 Ladies from the Rwanda Muslim Community, it’s an honor to have you here with us. I want to once again welcome you here at the UAE Embassy and to thank you for taking the time to come

and participate in these interesting discussions.

 With most of you being entrepreneurs, I’m sure you know about the United Arab Emirates, with its capital Abu Dhabi & Dubai the economic capital.

 The UAE has a population of approximately 10million, with 90% being foreigners who come to live, study & work in the UAE.

 The founding father of the UAE, the late Sheikh Zayed once said, and I quote: “The woman is half of the society, any country which pursues development should not leave her in poverty or

illiteracy. I am on the woman’s side.” End of quote.

Allow me to share key facts regarding women’s empowerment in the UAE:

 Today, by law the UAE Constitution guarantees equal rights to all of its citizens, including women who have the same legal status, to name but a few, the claim to titles, access to education, the right to practice professions, and the right to own as much properties as men do. Women can also own businesses.

 The World Economic Forum’s 2020 Global Gender Gap Report states that the UAE is one of the region’s best performing countries having closed the overall gender gap by 66%. The

 The World Bank’s 2020 Women, Business and the Law Report states that the UAE is one of the world’s top ten economies exhibiting the most progress toward gender equality.

 The UAE ranked 35 out of 189 countries in women’s empowerment according to the 2019 Human Development Report commissioned by the UNDP.

 In 2015, the UAE Gender Balance Council, a federal entity, was established to enhance gender balance in the public sector for women in the UAE and aims to help place the UAE among the

 In 2017 the UAE Gender Balance Council in coordination with the Organization of Economic Cooperation and Development (OECD) introduced the Gender Balance Guide, a tool for both the

public and private sectors with the aim to decrease gender inequality.

 On October 8th 2019, the Arab Charter of Women’s Rights was launched in Abu Dhabi to serve as a guideline for all Arab League member states with an aim to inform legislation and ensure Arab women’s rights. The Arab Charter of Women’s Rights comprises 25 articles that tackle issues from mandatory education and health care to work opportunities and free services for new mothers. The charter states that Arab women should have the right to marry foreigners and pass their citizenship on to their children.

 Emirati women in the UAE hold two-thirds of public sector jobs, with 30% in leadership roles and 15% in technical and academic roles.

 Women also make up 20% of the UAE’s diplomatic corps.

judges were appointed to the Federal Judiciary for the first time.

 In 2018 the Law on Equal Wages and Salaries for Men and Women was approved by the UAE Cabinet in support of gender equality as well as granting the working mothers a paid maternity leave and reduced working hours for new mothers.

 In 2017 the UAE had the highest number of women on Forbes’ 100 Most Powerful Arab Businesswomen with 19 Emirati women on the list.

 In 2012 the UAE became the first country in the region to enact legislation requiring the inclusion of female board members in every government agency and corporation.

 Today 15% of board level positions nationwide are occupied by Emirati women.

 Etihad Airways marked International Women’s Day 2019 with an all-female flight for the first time in UAE history. Women Captains piloted the Airbus A380 along with a 19-member all-female cabin crew from 13 nationalities & they were in charge of 398 guests.

sector in the UAE.

UAE also launched the Women in Tech Accelerator program aimed at promoting the economic and social development of female entrepreneurs.

 Emirati women business-owners account for 10% of the total private sector with 23,000 individuals running projects worth over AED50 billion.

 The empowerment and protection of women is one of the key pillars of the UAE’s foreign aid strategy.

 In 2004, the UAE became a signatory to the United Nations Convention on the Elimination of All Forms of Discrimination Against Women. The UAE is also a signatory of the following

Night Work of Women Employed in Industry and the Convention on Minimum Age.

 To date the UAE has dedicated US $322 million for humanitarian initiatives and interventions focused on women and girls.

 The UAE has donated over 26$ million to the core budget of UN-Women since its founding in 2010 to support its operations and efforts to promote gender equality and women’s mpowerment.

 The UAE currently has four women fighter pilots and 30 women who work with the country’s special security forces.

 In 2019 a military and peacekeeping training initiative, operated by the UN, in partnership with the UAE Ministry of Defense and the General Women’s Union in the UAE, trained

over 130 women from multiple Arab countries.

 These cadets have been trained to protect women’s rights, help reduce sexual violence and provide support to women in conflict zones globally.

to their male counterparts.

 77% of Emirati women enroll in higher education after finishing their secondary school.

 Women make up to 70% of all UAE national university graduates.

 46% of all UAE university graduates in science, technology, engineering and mathematics are women.

 Emirati women make up 60% of the country’s total UAE national university graduates and 43% of the UAE national workforce.

As I conclude, I want to highlight that we recognize the great initiatives put in place by the Government of Rwanda in empowering women & fostering gender equality in all sectors. The results have been outstanding.

Therefore, in the different programs initiated by the UAE Government here in Rwanda, women empowerment is always taken into consideration. To name but a few, in 2019 the Embassy held a successful training in partnership with the RDB & the Ministry of Education, to Empower 100 Women Future Leaders in Hospitality & Tourism Excellence. The training was conducted by highly qualified trainers from the Emirates Academy of Hospitality Management & was attended by young women working in Rwanda’s tourism & hospitality sector.

Once again, thank you so much for your time and I hope we have an interesting discussion. (End)