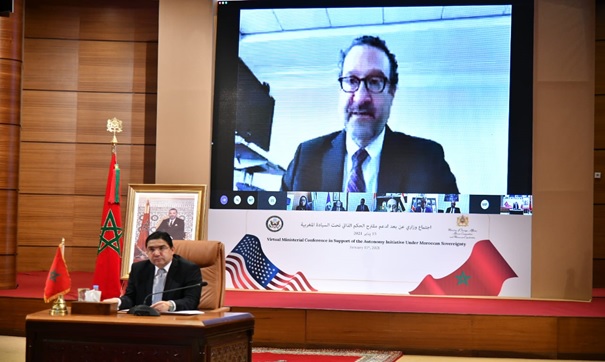 The participant countries to Ministerial Conference co-chaired by Morocco and the United States reiterated their commitment to continue their advocacy for a solution, using the Autonomy Plan as the sole framework for resolving the Sahara regional dispute

The Kingdom of Morocco and the United States of America organized, on Friday, January 15, 2021, a Ministerial Conference in Support of the Autonomy Initiative under the Sovereignty of Morocco.

This event co-chaired by the Minister of Foreign Affairs, African Cooperation and Moroccan Expatriates Mr. Nasser Bourita and the US Assistant Secretary of State for the Middle East and North Africa, Mr. David Schenker, was attended by more than 40 countries, 27 of which were represented at ministerial level.

It is important to recall regarding Autonomy Plan that the Kingdom of Morocco has, in response to the UN Security Council’s appeals to the parties to end the political impasse over the Sahara issue, Morocco presented on April 11, 2007 “the Moroccan Initiative for the Negotiation of an Autonomy Statute for the Sahara Region” to the UN Secretary General. This initiative is the result of an extensive consultative process conducted at the national, regional and international levels.

Through this Initiative, Morocco guarantees the people of the region to democratically manage their affairs through the legislative, executive and legal bodies. The populations will be provided with financial resources in order to contribute to the development of the region in all areas and to participate actively in the economic revival and the revival of cultural and social life, not only in the Sahara region but in Morocco as a whole.

Thus, the Initiative for Autonomy under the Sovereignty of Morocco based on compromise and in full compliance with international law, the UN Charter and UN resolutions of the General Assembly and Security Council, as well as the right to self-determination, has been deemed “serious and credible” in the 17 resolutions adopted by the Security Council since 2007. As the third path between pure integration and independence, it is considered to be the only solution that satisfies the parameters set out in Security Council Resolution 2548: A realistic, workable and sustainable political solution based on compromise.

In his opening remarks, Mr. David Schenker noted that the US recognition of Morocco’s sovereignty over its Sahara is a clear statementthat the Autonomy Plan suggested by Morocco in 2007 is the only basis for a just and lasting solution to the conflict. Mr. Schenker also called on the international community to back the autonomy plan as “the only credible and realistic basis for negotiations.”

Representatives of 40 countries expressed during the conference their strong support for the Moroccan initiative as the only basis for a just and lasting solution to the Sahara regional dispute.

Speaking at the same event, foreign ministers of the UAE, Bahrain, Gambia, Guinea, Gabon, Zambia, Haiti, Guinee, Togo, Guatemala, Antigua and Barbuda firmly backed Morocco’s territorial integrity and to the Autonomy Plan as the only political solution to the Sahara issue that would contribute to regional peace and stability.

Most participants recalled the Proclamation of the United States of America which reaffirmed support for Morocco’s Autonomy Plan as serious, credible, and realistic and as the only basis for a just and lasting solution to the dispute. They also underlined that the US Presidential Proclamation provides guidance and strengthen the international consensus in support of the UN-exclusive political process.

HE Mr. Abdellatif ben Rashid Al Zayani, thanked during his speech the Kingdom of Morocco and the USA for the event which “demonstrates the wide international support of the sovereignty of Morocco over its Sahara.” and noted that this support was “clearly expressed during Al-Ula Summit”.

MFAs of Gabon and Zambia, HE Mr. PacomeMoubelet-Boubeya and HE Mr. Joseph Malanji respectively hailed the developments projects led by HM the King in the southern region of Morocco and reiterated their “full support of the Kingdom’s territorial integrity.”

The MFA of Antigua and Barbuda, Mr. Paul Chet Greene noted that “The Autonomy Plan is the only realistic solution to end this regional conflict.” and added that “This solution will bring peace and stability to the whole Maghreb region.”

MFAs of Gambia and Togo, HE Mr. MamadouTangara and HE Mr. Robert Dussey stressed that Morocco’s Autonomy Initiative is the “right initiative for the African countries and for the whole region”. HE Mr. MamadouTangara noted during his speech that “Gambia was the first country to open a consulate in the Moroccan Sahara” an act that translates clearly its full support of the Moroccan territorial integrity.

Mr. Christophe Farnaud, Director of the North Africa and Middle East Department at Quai d’Orsay, said that “France has long supported the Autonomy plan as a realistic and serious basis for negotiations under the aegis of the UN.”

Participants also welcomed the development endeavors launched in the region in the framework of Morocco’s “New Development Model for the Southern Provinces.” led by His Majesty the King.

The new Development Model for the Southern Provinces, noted many participants, is a concrete step that paves the way for economic and security cooperation in the Maghreb region as well as African stability and prosperity.

The Conference also highlighted the decision of 20 countries to open Consulates in the cities of Laayoune and Dakhla, considering that such steps will promote economic and business opportunities for the region, strengthen the vocation of the Sahara region as an economic hub for the entire continent and advance progress towards reaching a long-awaited final political solution to this dispute.

At the conclusion of their speeches, all participant countries reiterated their commitment to continue their advocacy for a solution, using the Autonomy Plan as the sole framework for resolving the Sahara regional dispute.