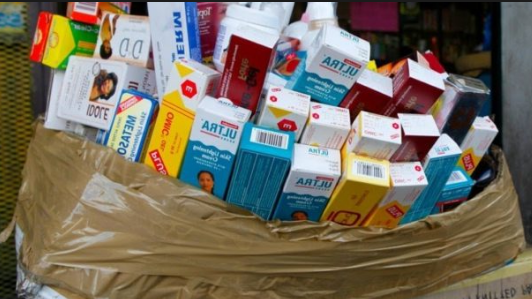 Kigali: A joint operation conducted on Wednesday in various parts of the country seized assorted skin bleaching products valued at over Rwf13 million.

The skin lightening products valued at about Rwf7 million were taken from shops in the Eastern districts of Rwamagana, Ngoma, Kayonza, Bugesera, Gatsibo, Nyagatare and Kirehe.

The operation was also conducted concurrently in the districts of Musanze, Gakenke, Burera, Huye, Gisagara, Nyamagabe, Rubavu and Rusizi. Also seized products include expired medical drugs in Nyanza and Huye worth about Rwf5 million.

Other products taken off the shelves include over 3000 pieces of biodegradable polythene bags, and expired foodstuff including Blue Band, Yoghurt, biscuits, mayonnaise, sweets, bread and perfumes, among others.

“The joint operation is continuous to enforce the law against bleaching lotions, toilet soaps, oils and sprays as well as expired products, plastic bags and other illegal products on the local market,” RNP spokesperson, Commissioner of Police (CP) John Bosco Kabera said.

The skin bleaching products are labeled illegal under the ministerial order determining the list of cosmetics whose use is prohibited in Rwanda; law on organization, functioning and competence of the Council of Pharmacists; law governing narcotic drugs, psychotropic substances and precursors in Rwanda; and the law relating to the regulation and inspection of food and pharmaceutical products.

There are 1,342 cream and oil brands with hydroquinone and mercury prohibited in Rwanda.
Medics suggest that the two toxic chemicals; hydroquinone and mercury react with ultraviolet rays and lead to more pigmentation and premature aging. The more these products are used the less melanin the body produces, and this leads to an increased risk for skin cancer.

According to World Health Organization (WHO), mercury in skin lightening soaps and creams has side effects on the kidney, cause skin rashes, skin discoloration and scarring, as well as a reduction in the skin’s resistance to bacterial and fungal infections. Other effects include anxiety, depression or psychosis and peripheral neuropathy.

Mercury in soaps and creams, according to medical experts, is eventually discharged into wastewater, and then enters the environment, where it becomes methylated and enters the food-chain as the highly toxic methylmercury in fish. Pregnant women who consume fish containing methylmercury transfer the mercury to their fetuses, which can later result in neuro-developmental deficits in the children. (End)