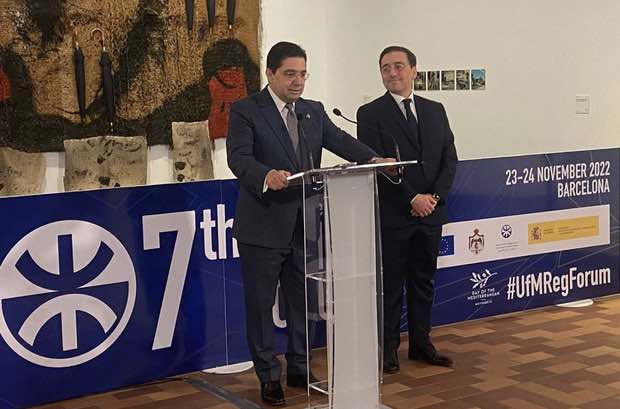 The Minister of Foreign Affairs, African Cooperation and Moroccan Expatriates, Mr. Nasser Bourita, held talks, on November 24, 2022 in Barcelona, with his Spanish counterpart, Mr. José Manuel Albares, within the framework of the 7th Regional Forum of the Union for the Mediterranean.

During a joint press conference, Mr. Nasser Bourita and Mr. José Manuel Albares affirmed that Morocco and Spain are completely satisfied with the implementation of the bilateral roadmap, set up last April, on the occasion of the visit to Morocco of the President of the Spanish Government, Mr. Pedro Sanchez, at the invitation of HM King Mohammed VI.

In the same vein, Mr. Bourita said that this new meeting, the third in less than a week, reflects “the very close coordination and strong relationship that our two countries share’’.

This meeting, held on the sidelines of the 7th Regional Forum of the Union for the Mediterranean (UfM), was also an opportunity to review the progress made in the implementation of this roadmap and examine ways to accelerate its implementation, he added.

“We are in a new phase of our relationship and we are very pleased to continue to work in all sectors: economic cooperation, political dialogue, fight against illegal immigration, terrorism, regional security, as well as ways to develop the cultural dimension and security cooperation,” said the Minister.

In this context, he noted that the next High Level Meeting “will provide an opportunity to see that we have implemented all the elements of the roadmap, but also to agree on new and more ambitious elements of our bilateral relationship.”

Referring to bilateral cooperation on migration, Bourita stressed that the two countries have “set an example of fruitful cooperation” in the fight against illegal migration.

According to the Minister, “this cooperation has brought much to the security of Morocco and Spain, but also to the whole region,” adding that “this model must be strengthened and promoted”.

“At the global level, there is a consensus that what Morocco and Spain are doing, in a cooperative and constructive way, is an example to follow,” said Bourita.

For his part, Mr. Albares said: “We are very satisfied with this new stage and this dynamic that marks the bilateral relations, as well as the achievement of the roadmap’”, established on the occasion of the visit of the President of the Spanish government, Mr. Pedro Sanchez, to Morocco, at the invitation of HM King Mohammed VI.

“All working groups meet on a permanent basis and these meetings are bearing fruit,” said the top Spanish diplomat, adding that illegal immigration from Africa has been reduced by 20% and bilateral trade has increased by 30%, Spanish exports reaching 7 billion euros since the beginning of the year.

This meeting, the seventh between the two ministers, was an opportunity to “continue to advance the Spanish-Moroccan roadmap, which is being implemented point by point,” said Albares, noting that both countries continue to cross agendas, so that the High Level Meeting can be held as soon as possible.