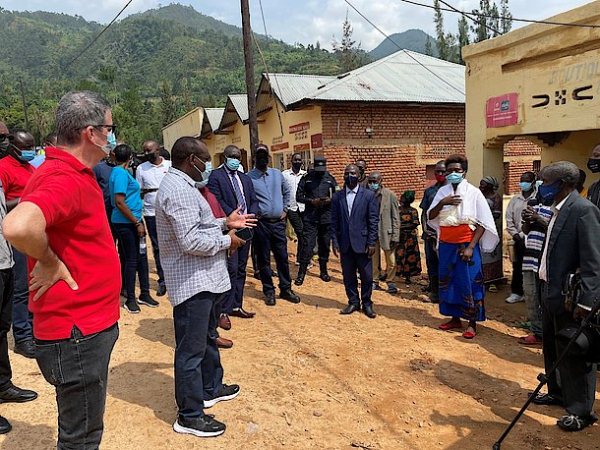 A joint-field visit was conducted in Rusizi and a small part of Nyamasheke districts, Western Province, by the Minister of infrastructure Claver Gatete accompanied by the Governor Western Province, François Habitegeko, and other officials.

Minister has reiterated a ministerial call for Rusizi district authorities to harmonise infrastructure plans based on district priorities. He argued they make a thorough assessment of infrastructure needs to ensure efficiency. The mission was conducted to inspect the status of the existing infrastructure projects as well as assess the progress of the ongoing ones for s timely implementation.

The projects inspected include electricity connections, the status of roads (National roads), port, RUDP urban inroads in Rusizi city, cross-border markets and selling points as well as pending expropriation issues. It was found out that, Rusizi – Bugarama – Ruhwa road is in bad condition and needs maintenance. As a way forward, Rwanda Transport Development Agency (RTDA) in collaboration with the district was instructed requested to fast-track the maintenance of this road as soon as possible.

Rusizi district is fundamental and strategic because it borders DRC and is among six secondary cities meant to reduce pressure from the city of Kigali. Funded by the World Bank, the urban roads under Rwanda Urban Development Project (RUDP) were constructed, where phases 1 and II were fully completed. Phase III of the project is in pipeline and the contractor is in place. A total of 10.5 km will improve access to sustainable services to strengthen urban management and resilience in the district.

Upgrading of Gihundwe – Rwahi – Busekanka access road to Nkombo Island is a priority in the District Action Plan 2022/23. The meeting recommended the upgrading of the existing study from gravel road to chip seal. Rusizi District and RTDA to take lead and expedite the implementation of this project.

The Energy Projects that were visited include the ongoing electrification sites in the Gitambi and Nzahaha sectors where more than 500 households will be connected in each of the sectors by the latest end of March 2022.

The constructed modern markets under Green Electricity Fund (GEF) Program include 5 in Rusizi, 5 in Karongi, and 4 in Nyamasheke districts. They are all completed and the districts were requested to think of Value-Additional activities that will increase electricity consumption, this will improve the standards of living for the citizens of these particular districts.

Currently, the electricity access in the Rusizi district is at 66.10% and new connections have to be fast-tracked to 76.59%, through expediting tenders under Rwanda Universal Electricity Access Program (RUEAP) to increase connections.(End)