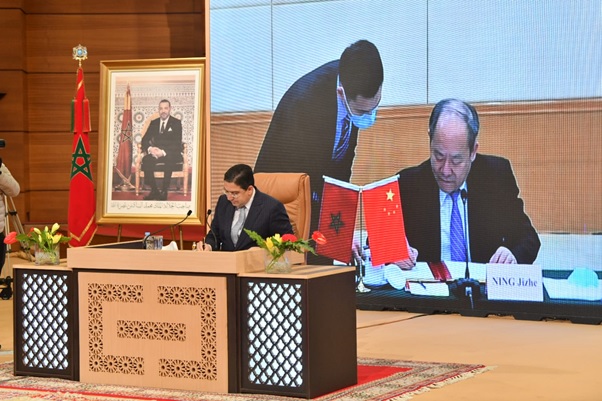 Rabat – The agreement on the Joint Belt and Road Implementation Plan’ between the Kingdom of Morocco and the People’s Republic of China was signed, Wednesday, during a ceremony held by videoconference.

It was signed by Minister of Foreign Affairs, African Cooperation and Moroccans Abroad, Nasser Bourita, and Vice Chairman of the Chinese National Development and Reform Commission (NDRC), Ning Jizhe.

This agreement aims to promote access to Chinese funding provided by the Belt and Road Initiative (BRI) for the realization of large-scale projects in Morocco or for the facilitation of trade, the establishment of joint ventures in various fields (industrial parks, energy, including renewable energy).

It also covers cooperation in Research and Development (technology, energy, agriculture, …), and technological and technical cooperation, as well as vocational training.

The Chinese government undertakes, under this agreement, to encourage large Chinese companies to set up and/or invest in Morocco (automotive industry, aerospace, high-tech and e-commerce, agricultural and textile industry …).

Launched in 2013 by President Xi Jinping, the Belt and Road Initiative (BRI) is both a set of sea and rail links between China and the adhering countries.

It aims to promote new opportunities for cooperation between China and the 140 countries that have joined it. It is based on dialogue, partnership, mutual learning and inspiration rather than confrontation and alignment.

Since its launch, Morocco was the first country in Africa to join the “Belt and Road” initiative.