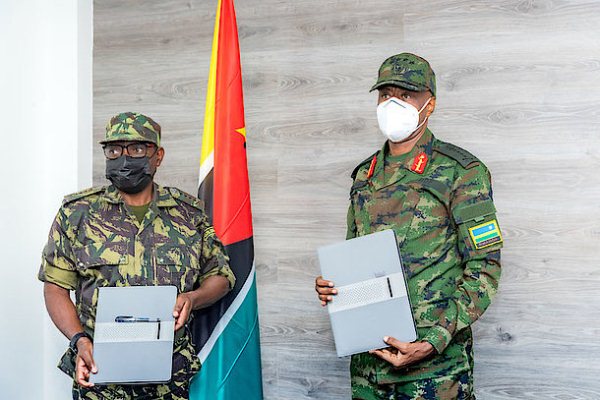 A joint security and defence meeting was held today between the Chiefs of Staff of the Rwanda Defence Force, Gen J Bosco Kazura and the Chief of General Staff of the Mozambican Armed Forces, Admiral Joaquim Mangrasse at RDF Headquarters, Kimihurura, Kigali.

They signed an agreement of expanding the cooperation between the two nations security forces in order to improve operations that are taking place in Cabo Delgado, Mozambique.

The agreement concludes series of discussions that were held since yesterday between Mozambique and Rwanda defence and security delegations to review the security situation in the fight against insurgency in Cabo Delgado province in Mozambique.

While speaking to Media after the meeting held at RDF Headquarters, Brigadier Chongo Vidigal, the Army Chief of Staff of Mozambique Defence Forces said the main issue discussed was how to strengthen the cooperation between the two nations security forces as well as to review joint operations against insurgents in Cabo Delgado. This includes adopting new strategies to deal with challenges met in the last six months.

Col Ronald Rwivanga, the RDF Spokesperson, said among the decisions that were made includes expanding the spheres of cooperation in terms of capacity building of the Mozambique Security Forces as well as improving the modus operandi of the joint forces in the theatre.(End)