Nyabihu: Perched on a green mountain in Rwanda’s Western Province, flanked by tea plantations, Pyrethrum fields and as one of the country’s top producers of Irish potatoes, the district in 2015 demographic health survey (DHS) accounted for 59% highest rate of malnourished children under five years above the national average of 38 percent.

A phenomenon which was largely blamed on lack of knowledge on healthy feeding, but after investing more resources to address stunting and malnutrition campaigns, there has been a decrease in number stunting cases.

The Vice Mayor  in charge of  Social Affairs in Nyabihu District, SIMPENZWE Pascal while briefing the journalists from different media houses touring the  district, on October 4, 2022, to assess progress in the fight against stunting and malnutrition in implementing the Stunting Prevention and Reduction Project (SPRP) supported by Rwanda Biomedical centre (RBC).

He said “ECD centres have been established   to address the issue of stunting and malnutrition in the district, and now the investment in children has had a great impact as there has been  a  decrease significantly in stunting, thanks to multi- sectorial approaches all aiming at changing the residents’ mindset toward appropriate nutrition.” 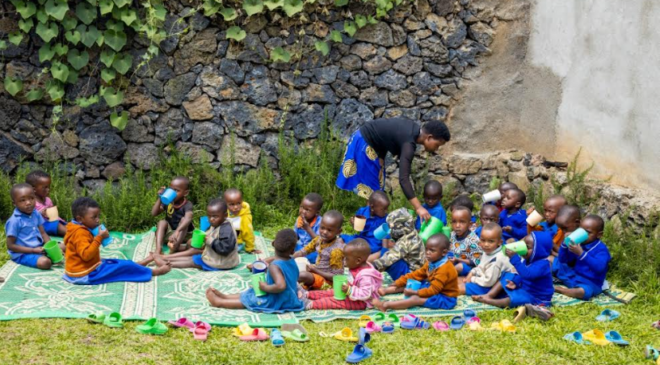 Simpenzwe further noted that the district has put much emphasis on home-based Early Childhood Development Centres (ECDs) that operate at every village under the supervision of local leaders.

“We embarked on an intensive sensitization campaign to change people’s mindsets towards a balanced diet. ECDs are drivers of our success because we are able to trace children with malnutrition cases and immediately give them free milk and Shisha Kibondo among other forms of support,” noted Simpenzwe

He pointed out that the district has over 469 home-based ECDs.

Upon fact finding mission, we found MUKAMUSONI Denise at her home village of Biriba, Jaba sector where she offers home based ECD with the help of some community members

There are so far 115 children who have been given attention under the ECD program at her home, where men too have taken the initiative of helping the women, of which was not the case in previous years.

The harmony between women and men in taking care of these children is one of the ways to reduce stunting and malnutrition among children in Nyabihu.

MUKAMUSONI said: “We have six men who normally come to give us support in other duties like cooking, feeding and teaching the children and we believe more men will come to join us in the program.”

At the ECD, you can vividly realise that the children have special care, thanks to the caretakers who work tirelessly to ensure the kids are taken care of. 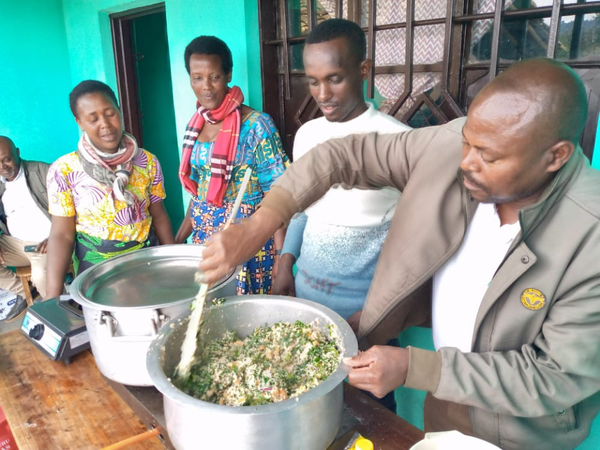 NDINAYO Schadrack is one of those who has been able to spare time and contribute to the wellbeing of the children and had this to say “Initially we left all the work to the women and even didn’t pay attention of how our children were feeding but after realizing the stunting growth of our children and the awareness campaign that the district had initiated, most of us men are now able to take care of other responsibilities that we left for the women to do, for I am able to spare time here and cook, feed and teach these children whose parents leave here and go to tend in their gardens, that I find okay for me and other men here.”

There is also another campaign called “BANDEBEBEHO” which reminds men to take responsibility towards helping their wives in the fight against malnutrition and stunting growth, this campaign was started given the fact that men did not care about the wellbeing of their children.

Nyirahabineza Jacqueline, a mother of twins enrolled her children in 2021 at the center  run buy Mukamusoni, said the ECD home Centre has  improved health of her children as they are now no longer attending to it but are in preschool.
“Before bringing my twins to this home for the ECD program, I worked a lot and didn’t have much attention to them as to breastfeed them and provide good care for them given the fact that my man was also engrossed into other things but since I took them there and were taken good care of, am thankful to them and am also now able to take time to contribute to caring for the children at the centre.” Said Nyirahabineza

In the village of Cyinkenke in this sector of Mukamira, another ECD center has been built to fight against stunting and malnutrition against children to help them realize their full potential while also parents continue with their work.

Barihuta Musoni Jean de Dieu, who runs the center, says he is happy being able to be part of the “Bandebereho” campaign since he finds no problem in helping women to doing other duties that were referred to only women’s work.

“Besides the care we provide for the children here while their parents have gone to work, we also give trainings to their parents about good feeding and cooking tips, proper hygiene and sanitation training while also encourage them to have akarima kumurijokoni (Kitchen garden) in their homesteads and that we do by showing them from the garden we have at the centre”

Research made by the government on early childhood development revealed that most crucial aspects of a child’s life are susceptible to change in the first three years. This realization led Rwanda to establish an Early Childhood Development Policy in September 2011.

Rwanda aims to reduce stunted growth among children under 5 years old to 19 per cent by 2024.