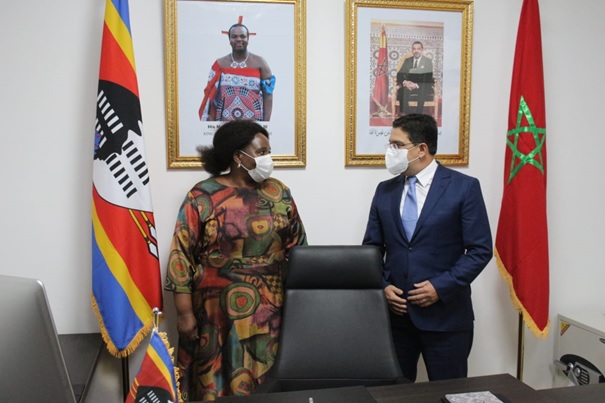 The opening on Tuesday of a Consulate General of the Kingdom of Eswatini in Laayoune is a “sovereign act of solidarity and support” for Morocco’s rights over its territorial integrity and sovereignty on its Sahara, underlined Eswatini Minister of Foreign Affairs and International Cooperation, Mrs. Thulisile Dladla.

“By taking the sovereign decision to open a consulate here in the Moroccan Sahara, we wish to reaffirm, in a political, diplomatic and legal manner, our support for Morocco’s position on this issue,” said the Minister during a joint press briefing with the Minister of Foreign Affairs, African Cooperation and Moroccan Expatriates, Mr. Nasser Bourita, following the inauguration ceremony of this diplomatic representation, on Tuesday October 27, 2020.

Eswatini’s top diplomat added that her visit to Laayoune, which represents “a major turning point” in the promotion of bilateral ties, aims to reiterate the constant position of her country regarding the Moroccanity of the Sahara, noting that the inauguration of this consulate will give a strong impetus to the “historic and solid relations” linking the two Kingdoms, thanks to the vision and the guidelines of the two heads of state, His Majesty King Mohammed VI, and His Majesty King Mswati III.

“This fraternal coalition” is intended to boost bilateral socio-political and economic cooperation and “to constantly defend the cultures and values” of the two African states, she pointed out.

“The sovereign act of opening on Monday an embassy in Rabat and a consulate today in Laayoune, in the Moroccan Sahara, is inspired by this shared vision of the two Sovereigns,” she noted.

The inauguration of a diplomatic representation in “this integral part of Morocco” will play a central role in strengthening the existing “cordial relations” between the heads of state, governments and peoples of the two friendly countries, she added.