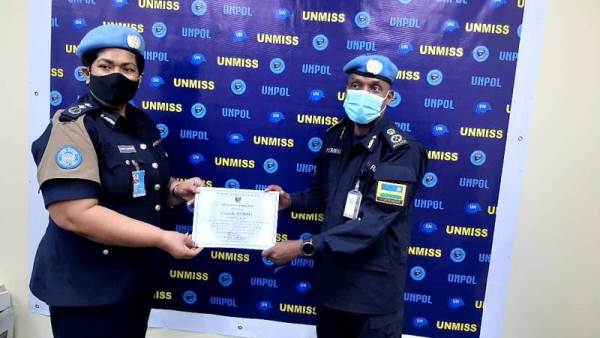 The Police Commissioner of the UN Mission in South Sudan (UNMISS), Madam Unaisi Lutu Vuniwaqa has commended Rwandan peacekeepers under the Formed Police Units (FPU)s for the “job well done” during their tour of duty.

“In recognition of your service, dedication and valuable contribution towards UN mandate as a unit commander for RWAFPU-2 Juba in UNMISS,” the certificate of appreciation awarded to ACP Tembo reads in part.

On the other hand, the Letter of Commendation awarded to SSP Urujeni also reads: “…awarded in recognition of her exemplary service to the UN Mission in the Republic of South Sudan as commander of RWAFPU-3 Juba.”

It adds: “She has served with distinction and dedication to the mission, consistently demonstrated diligence, professionalism and high level of competency. Her valuable contribution to UNMISS mandate implementation is much appreciated.”

Madam Vuniwaqa, while awarding the certificates, noted that the two Rwandan contingents; FPU-2 and FPU-3, served under “very challenging times” of COVID-19, which demanded a change in posture in the policing roles to continue protecting civilians.

In June, at the height of COVID-19 spread, hostilities broke out in Juba Protection of Civilian (PoC) site among IDPs. Rwanda FPU-3 responded, prevented further escalation of the hostilities and restored calm.

“We appreciated your professional effort during the crisis in Juba and for that you are receiving a Letter of Commendation from the Police Commissioner,” Madam Vaniwaqa said while presenting the Letter to SSP Urujeni.

According to the directives by the UNMISS Police Commissioner on awards and recognition, the Letter of Appreciation is awarded to a Police officer in recognition of his or her hard work and efforts… during the tour-of-duty.

On the other hand, the Letter of Commendation is awarded in recognition of the “significance and commendable actions or duty performed by the officer, which may be considered outside the normal course of duty or any sacrifice made  in order to achieve positive landmark results for UNMISS UNPOL.”

Currently, Rwanda is the second leading contributor of Police peacekeepers with more than 1000 peacekeepers in different UN missions. (End)