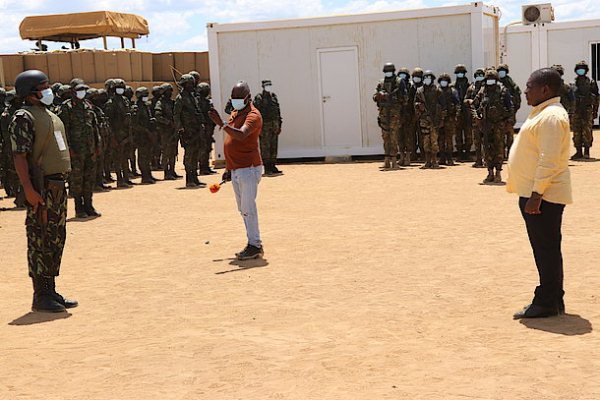 On 29th Dec 21, the President of the Republic of Mozambique, Filipe Nyusi accompanied by Minister of Defence made an official visit to Mueda district in Cabo Delgado Province.

He was received at Mueda Airstrip by Brig Gen Vidigal the acting Mozambique Armed Forces (FADM) Army Commander who briefed the President on security situation in Cabo Delgado and Niassa provinces.  He met representatives of the forces from Mozambique, Rwanda and SADC Mission in Mozambique (SAMIM).

President Nyusi thanked all countries represented for the good work done in fighting terrorists and requested them to continue intensifying military operations in the districts of Macomia, Mocimboa da Praia, Nangade Mueda and Ibo island.

He thanked President of Rwanda and all Rwandans to have accepted to send their sons in operations against terrorists and added that their sacrifice will never be forgotten.

He further thanked SADC Mission in Mozambique (SAMIM) which was represented by Bostwana special forces; for the operations conducted in the district they covered. He commended South Africa, Tanzania and Lesotho Forces for their support to provide water, food and reconstruction of shelters to the people in districts they operate in. He called for more vigilance in Macomia district where insurgents continue to cause insecurity.

The Head of State requested for the Mozambican forces to learn through the experience of the forces that came to support them because the partners will not remain forever in Mozambique.

He concluded by wishing everyone a happy new year.(End)