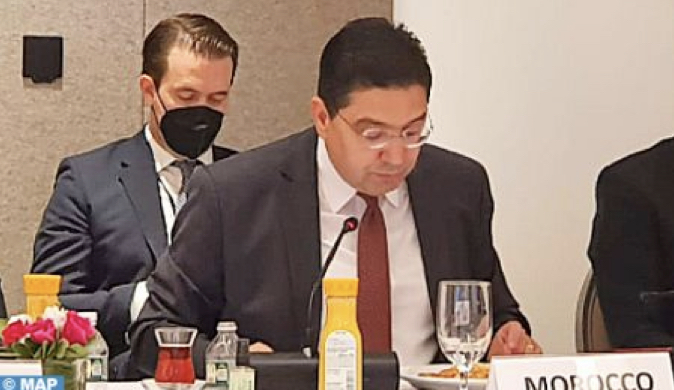 United Nations (New York) – Morocco underscored, on Wednesday  September 21, 2022, in New York, the need to strengthen the role of mediation in preventing and mitigating humanitarian crises and improving the lives of civilian populations in conflict areas.

In this regard, Morocco has conducted direct mediation, under the Personal Supervision of His Majesty King Mohammed VI, President of Al-Quds Committee, with the United States of America, which led to the opening of the Allenby/King Hussein border crossing, linking the West Bank and Jordan, Minister of Foreign Affairs, African Cooperation and Moroccan Expatriates, Mr Nasser Bourita said during the 12th Ministerial meeting of the United Nations Group of Friends of Mediation.

Morocco remains committed to the central role of the UN in ensuring international peace and security, he said during the meeting held on the sidelines of the 77th session of the UN General Assembly.

Mr. Bourita noted that “in the current international context and in light of the more and more visible prevalence of conflict in international relations, mediation continues to be one of the most important tools at our disposal to prevent and solve conflicts.” When it is used to prevent conflict, mediation is most valuable to prevent and mitigate complex humanitarian crises, he added.

Morocco’s FM recalled that overarching objective of any mediation process is to reach viable political solutions to conflicts. “It is true that mediation can be instrumental in solving specific humanitarian crises within larger conflicts. Yet, we should keep in mind the adverse effects of proliferation of initiatives on the prospect of conflicts resolutions,” he said.

For Mr. Bourita, the focus should remain on engaging parties to a conflict in the search for a final political settlement and holding them accountable if they fail to do so. “This, in turn, will pave the way for post-conflict reconstruction and recovery,” he explained.

The guarantee for both successful mediations and the alleviation of complex humanitarian crises is the effective division of labor between UN mediators and the UN specialized agencies, as well as a clear demarcation between the political track and the humanitarian one, the minister stressed. Peacekeeping operations, in particular, might be more suitable to that end, depending on the context, he added.

Mr. Bourita recalled that Morocco provides direct humanitarian assistance, as part of its participation in peacekeeping operations in the Central African Republic and the Democratic Republic of Congo.

Morocco stands ready to continue to work with like-minded states towards making mediation a more effective tool in preventing and solving conflicts, which in turn will create the conditions for lasting peace, security and development, the FM told participants in the meeting convened by Turkey and Finland.

Morocco is a member of the UN Group of Friends of Mediation, which was established on September 24, 2010, to promote and advance the use of mediation in the peaceful settlement of disputes, conflict prevention and resolution.