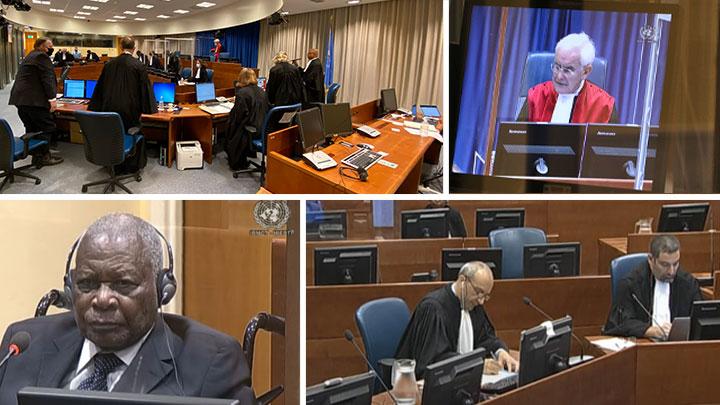 OPENING STATEMENT BY THE PROSECUTION

The Opening Statement of the Prosecution began with an introduction by Mr. Rashid S. RASHID reminding the charges brought against Mr. KABUGA and their practical implications. Mr. KABUGA is said to have supplied the weapons, founded and served the RTLM (Radio Télévision Libre des Milles Collines). He is not the first businessman to face prosecution for serious and international crimes as it has been done previously by the Nuremberg Tribunal. Mr. KABUGA is accused of having supported Interahamwe and local groups in KIGALI and arming them, to have led the effort to establish the RTLM anti-Tutsi propaganda as well as having defended the radio’s incendiary broadcast as they grew more violent with time. The Prosecution — as part of its introduction — then retraced Mr. KABUGA’s history with Tutsi hate, his alleged actions related to the matter such as his appearances at roadblocks, explicitly calling for the extermination of Tutsi, holding fundraisers for weapons in GISENYI, broadcasting RTLM’s public incitement to commit genocide. Furthermore, a brief history of the genocide was pronounced.

The Prosecution then focused on Mr. KABUGA, his life, personality and situation in RWANDA at the time of the genocide against the Tutsi. Mr. KABUGA — a businessman and one of the richest men in RWANDA — was born in BYUMBA and was a major figure in RWANDA. Because of his close family links to Juvenal HABYARIMANA, he had privileged access to the former president to promote and lobby his cause. He was also a prominent member of the MRND, as well as a major financial donor who represented the BYUMBA prefecture and was venerated as he was introduced as a leader of the Interahamwe.

Focusing now on the political context, the Prosecution recalled the administrative divisions that were in force at the time of the genocide in 1994, the situation with the political parties, the ethnicities and the power of President Juvenal HABYARIMANA and reminded of the importance of having personal connections with the President. According to the Prosecution two events shaped RWANDA in the early 1990s: the war with the RPF and the advent of the multiparty system.

KABUGA AND THE RTLM:

According to the Prosecution, Mr. KABUGA founded RTLM with other Hutu extremists, served as its president and took active steps to ensure its operations were successful and used his authority to further crimes and invested his own money into the project often without receiving commercial interest in return. The prosecution quoted Ms. A. DES FORGES as saying that, radio was the preeminent mode of media communication as RTLM supplanted the nation radio — Radio RWANDA — during the genocide. Linking Félicien KABUGA to Tutsi hate, the Prosecution says that he was introduced as a guest of honor during a speech about throwing Tutsi into the river. The Prosecution holds that, by signing the rules of the RTLM which stipulate in their Article 5 that the radio should not broadcast emissions inciting hate, violence and division, Mr. KABUGA assumed all authority and responsibility to ensure the radio’s compliance with articles, but RTLM pursued to amplify the anti-Tutsi propaganda from its creation and onwards. Mr. KABUGA was President of the Comité d’Initiative at RTLM, working alongside other Hutu extremists. He was seen as “the boss” and in charge of the radio and its broadcastings.

The evidence of the RTLM anti-tutsi propaganda will be from two sources: the witnesses that saw the effects of the broadcasts and the selection of broadcasts that will be shared by the Prosecution. The RTLM deliberately blurred the line between Tutsi and RPF, in a manner comparable to the Nazi propaganda against Jews as the Prosecution detailed it. The propaganda itself dehumanized the Tutsi using innuendos such as inkotanyi and inyenzi. It portrayed the Tutsi as both subhumans and a foreign force. Witnesses of the prosecution will testify that such language was unequivocally understood as targeting the Tutsi population.

The prosecution affirms that after the assassination of president Juvenal HABYARIMANA on the 6th of April 1994, RTLM walled for three months “kill the inkotanyi and exterminate them” because they belong to one ethnic group. To exterminate them from the face of the earth and follow them to the countries where they would flee to exterminate them. They broadcasted locations where Inyenzi could be found such as places of worship, seen as sanctuaries — such as NYAMIRAMBO with its churches and mosques where Interahamwe and armed soldiers massacred unarmed civilians after the RTLM falsely broadcasted that armed soldiers were hiding there. RTLM also pushed people out of hiding to facilitate their murders, and it is common knowledge as the Prosecution supports, that the broadcast of a name as a potential accomplice was synonymous to a death threat or even a death sentence. RTLM specifically targeted Tutsi women encouraging attackers to “taste” women before killing them — portrayed as seductive agents of the enemy — which led to widespread acts of rape, mutilation, and other systematic acts of sexual violence against Tutsi women. In total, it is estimated, according to the Prosecution, that between 250,000 and  500,000 women were raped during the genocide.

“Mr. KABUGA set this in motion and loyal journalists amplified. The goal of this enterprise was criminal and each member of the joint criminal entreprise contributed according to their role and means. For Mr. KABUGA it meant providing leadership, corporate governance, fundraising and political influence. Above all, he ensured that RTLM remained on air during its existence.” Said the Prosecution. It further said that during the genocide, Mr. KABUGA denied any wrongdoing with the RTLM but admitted that the Comité d’Initiative had the power to stop the broadcasts if they wanted as they were supposed to under Rwandan Law. The Prosecution thus draws a conclusion that Félicien KABUGA enabled RTLM to incite hate and the massacres.

SUPPORT TO THE INTERAHAMWE

Mr. KABUGA is also accused of directly supporting the Interahamwe. According to the Prosecution, Mr. KABUGA supported these key perpetrators of the genocide through providing money, weapons and moral encouragement. Regarding this charge, the prosecution holds that, on April 7th 1994, Mr. KABUGA’s vehicles were used to load Interahamwe; stressing that the Interahamwe that trained at KABUGA’s building were among the most violent perpetrators. The Prosecution affirms that KABUGA’s compound was used for meetings and trainings of the Interahamwe. It further holds that, at that time, Félicien KABUGA was treated as the president of the group. In this trial, four former Interahamwe will testify that Mr. KABUGA supported them and other groups with money, uniforms, and transportation, and that they were indoctrinated in his building. The Prosecution emphasizes that Mr. KABUGA personally encouraged the killings, with testimonies situating him at a roadblock and warning the Interahamwe about Tutsi infiltrators, pledging support to the Interahamwe and personally distributing weapons.

FUNDRAISING, PURCHASE AND DISTRIBUTION OF WEAPONS

According to the Prosecutor, after the interim government moved to GITARAMA and then to GISENYI, Mr. KABUGA held fundraising which led to the setting up of the Fonds de Défense Nationale (FDN). For the rest of the genocide period, he was at the forefront of efforts to procure and supply weapons, raise money, transportation for the genocide, in several places such as the Meridien Hotel, the GISENYI military camp, the Commune Rouge cemetery, etc.

Finally, the Prosecution intends to bring evidence showing that Mr. KABUGA purchased weapons and helped with their distribution, through the GOMA airport and in direction of the GISENYI military camp. According to the Prosecution, some of the weapons received by the Interahamwe were sent to BISESERO in the KIBUYE prefecture to kill the few Tutsi civilians that had managed to flee there. Mr. KABUGA, according to the Prosecution also told Interahamwe to finish their job after distributing the weapons. By the end of the genocide, Mr. KABUGA fled to ZAÏRE along with others as the RPF progressed. In this trial evidence from previous cases regarding other persons KABUGA fled with and worked with will be used in addition to the new pieces.

“Mr. KABUGA acting in the cause of extremist beliefs played a key part in bringing about the crimes and the almost unimaginable suffering that was unleashed across RWANDA in 1994.”Concludes the prosecution. (End).

This note is a communication from the “Justice and Memory”; program which aims to strengthen the involvement of affected populations and local actors, in international and national trials related to the genocide perpetrated against the Tutsi, treated on the basis of the universal jurisdiction, in order to consolidate unity, reconciliation, the perpetuation of the memory of the genocide and social cohesion in Rwanda.

RCN Justice & Democracy, PAX PRESS, Haguruka and Association Modeste et Innocent (AMI) implement the program. The program follows the course of the proceedings in the trials of genocide cases based on the universal jurisdiction and informs impacted populations on the progress of the cases.