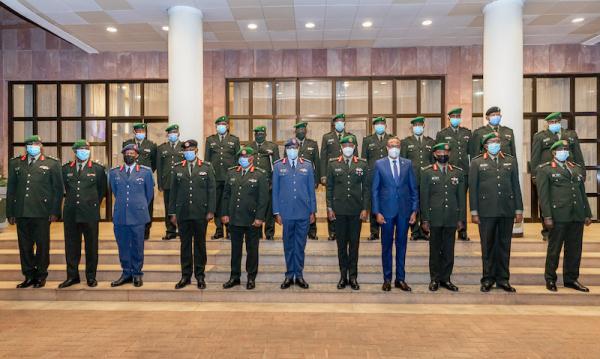 Rwanda Defence Force (RDF) has for the ninth time held a send-off ceremony to honour the service of Military personnel who reached retirement age and those whose service contracts came to an end.

The official send-off event held at RDF Headquarters Senior Officers Mess on 31 July was presided over by the Minister of Defence, Maj Gen Albert Murasira on behalf of the Commander-in-Chief of RDF.

Maj Gen Murasira applauded the retirees for their personal sacrifices, service rendered and contribution to the country. “After contributing to the liberation of your country Rwanda, individually, collectively and at different stages. You also participated in the international peace in which the RDF has played an active role.”

The Minister also recognized their contribution to the professionalisation of the RDF and other national development programmes. “For this personal dedication, commitment and patriotism, we take this opportunity to thank you”, he said.

On behalf of the retirees, retired (Rtd) Col John Karega emphasised that they are retiring as happy people because their contribution to liberate Rwanda was not in vain.

He thanked His Excellency the President of Rwanda and Commander-in-Chief of Rwanda Defence for his good leadership during the liberation struggle for the past 30 years up to day and vowed to remain loyal and committed to national development journey.

“As we retire, we seize this opportunity to assure the Commander-in-Chief and the entire RDF leadership that even though we are retiring, we shall remain committed to the continuous journey of liberation of our country and that we shall never betray our comrades on the course of national development”.

The retires were awarded certificates as a recognition for their service rendered to Rwanda Defence Force. The event was also attended by the Chief of Defence Staff, Service Chiefs and selected Generals and senior officers. (End)