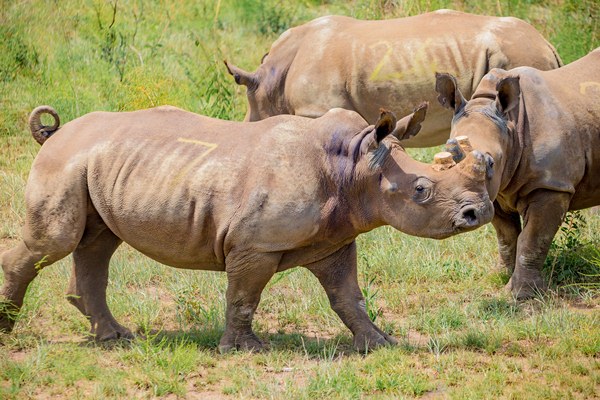 In the largest single rhino translocation ever undertaken, 30 white rhinos have been introduced to Akagera National Park in Rwanda, sourced from andBeyond Phinda Private Game Reserve in South Africa. Announced on Monday November 29th, the translocation was carried out through a collaboration between the Rwanda Development Board, African Parks and andBeyond, with funding provided by the Howard G. Buffett Foundation.

This historic initiative aims to extend the white rhino range and create a secure new breeding stronghold in Rwanda, supporting population growth to ensure the long-term survival of the species in the wild as high-levels of poaching continue to exert unsustainable pressure on current populations. The translocation will also help to enhance Akagera’s contribution to Rwanda’s wildlife economy, ensuring that the conservation of their outstanding natural landscapes generates long-term benefits for local communities and all Rwandans.

“This is an opportunity for Rwanda to substantially advance its contribution to rhino conservation, with Akagera poised to become a globally important sanctuary for black and now white rhinoceros. This is timely for the conservation of these incredibly threatened species. We’re extremely proud of our conservation partnerships and our national parks, which are playing a pivotal role in meeting biodiversity targets and in driving sustainable, transformative, equitable socio-economic growth,” said Ariella Kageruka, RDB Acting Chief Tourism Officer.

Sourced from andBeyond Phinda Private Game Reserve, set within the Mun-Ya-Wana Conservancy in South Africa, 30 rhinos were flown to Rwanda and transported to Akagera National Park on November 27th. Their journey covered a total distance of over 3,400 kilometers and forms the largest single rhino translocation in history. The rhinos will be monitored daily in Akagera by a dedicated team and a specialist veterinarian who will be overseeing their acclimation.

“Introductions to safe, intact wild landscapes are vital for the future of vulnerable species like white rhino, which are under considerable human-induced pressures,” said African Parks’ CEO Peter Fearnhead. “We’re grateful to our partners for making this historic translocation possible – the Rwandan Government for their forward-thinking conservation leadership, and the Howard G. Buffett Foundation and andBeyond for their integral support. Successes in parks like Akagera in Rwanda and Phinda in South Africa demonstrate how preventing the decline of nature propels prosperity and development.”

White rhinos are classified as near threatened with numbers declining across existing strongholds, largely due to poaching driven by demand for their horns. The introduction of southern white rhinos to Akagera expands their range to offer more safe area for the species. The successful conservation management of Phinda in South Africa makes the reserve a valuable source for important new rhino subpopulations.

“We have meticulously managed and grown the rhino population at Phinda over 30 years,” says Simon Naylor, andBeyond Phinda Conservation Manager. “This has been recognized in many ways, including being selected as the first private reserve to receive animals as part of the WWF Black Rhino Range Expansion Project in 2004. We are dedicated to ensuring the survival of the species throughout Africa and are proud to have provided healthy rhino, as well as volunteered our translocation skills, to help boost the creation of a new breeding cluster in Akagera.”

In 2010, the Rwanda Development Board and African Parks partnered to manage Akagera, transforming the park into one of the most coveted wildlife destinations in Africa and a sustainable revenue source for the region’s communities. Law enforcement was overhauled and robust community programs put in place, allowing for wildlife to increase and for key reintroductions to occur, such as lions in 2015 and black rhinos in 2017 and 2019. To ensure that this new population of white rhinos also flourishes, each rhino has been fitted with a transmitter to enable constant monitoring by dedicated tracking teams; a canine anti-poaching unit and helicopter surveillance are also in place to provide further support for their long-term protection.

“Our Foundation is pleased to continue to invest in Akagera’s remarkable transformation into a critical national park for Rwanda and an example of responsible conservation for the African continent and the world. While our funding is an important contributor to that success story, none of this would be possible without the leadership of the Government of Rwanda and the dedicated efforts of African Parks,” said Howard G. Buffett, Chairman and CEO of the Howard G. Buffett Foundation. “It was deeply personal for me to support the first black rhino reintroduction to Akagera in 2017 and it’s incredible that we have the opportunity to support this historic translocation today. Akagera is now positioned to become a key rhino stronghold for the continent, demonstrating what is possible in conservation when public and private partners collaborate.”

About African Parks: African Parks is a non-profit conservation organisation that takes on the complete responsibility for the rehabilitation and long-term management of national parks in partnership with governments and local communities. African Parks manages 19 national parks and protected areas in 11 countries covering over 14.7 million hectares in Angola, Benin, Central African Republic, Chad, the Democratic Republic of Congo, the Republic of Congo, Malawi, Mozambique, Rwanda, Zambia and Zimbabwe.

About andBeyond: andBeyond designs personalised high-end tours in 13 countries in Africa, five in Asia and four in South America, offering discerning travellers a rare and exclusive experience of the world as it should be. We own and operate 29 extraordinary lodges and camps in iconic safari, scenic and island destinations in Africa and South America. This enables us to positively impact more than 9 million acres of wildlife land and 3 000 kilometres of coastline. Established in 1991, andBeyond strives to leave our world a better place than we found it through our care of the land, wildlife and people, and the delivery of extraordinary guest experiences.

About the Howard G. Buffett Foundation:  The Howard G. Buffett Foundation seeks to catalyse transformational change, particularly for the world’s most impoverished and marginalised populations. The Foundation views its resources as rare risk capital that can improve conditions and create change in the most difficult circumstances and geographies. The Foundation has been partnering with the Republic of Rwanda to make nearly USD$430 million in philanthropic investments to address food security, mitigate conflict, and support conservation since 1999.  (End)