The donations handed over separately on Thursday and Friday, were extended to women forums in two internally displaced camps in Juba. 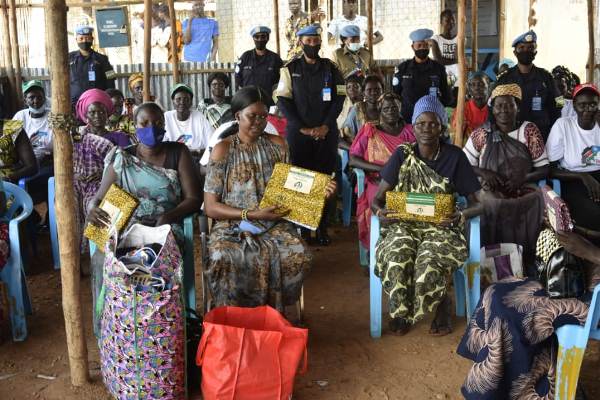 The handover of the items to beneficiaries in IDP camp 3 on Friday, October 15, preceded a community work–Umuganda–where the Rwandan peacekeepers joined the local police to improve cleanliness around Yei check-point police station.

Yei police station handles the policing matters of the displaced persons in the two camps in the area.

The handover of the donations also provided platforms to educate the women on fighting breast cancer, women empowerment, child protection, early marriage, and to encourage them to actively engage in peace and conflict resolution programmes.

“Young girls are facing challenges related to sexual violence and early marriage. In most cases, these are forced marriages where parents have a hand. These are young girls, whose future is shattered. As mothers, give your young daughters hope, protect them, encourage them to go to school,” SSP Masozera told members of the displaced women groups.

The women were further enlightened on life-threatening risks under such circumstances like complications while giving birth, depression, and suicide.

SSP Masozera encouraged them to break the traditional norms that influence early marriages and to form anti sexual and gender-based violence forums to discuss and act against such human rights violations.

Dr. Joseph Ndamiye Rugazura, the Chief Medical Officer for Rwanda FPU-3, educated the women on signs of breast cancer such as swelling of part of the breast, pain, and flaky skin and encourage them to always go for early.(End)