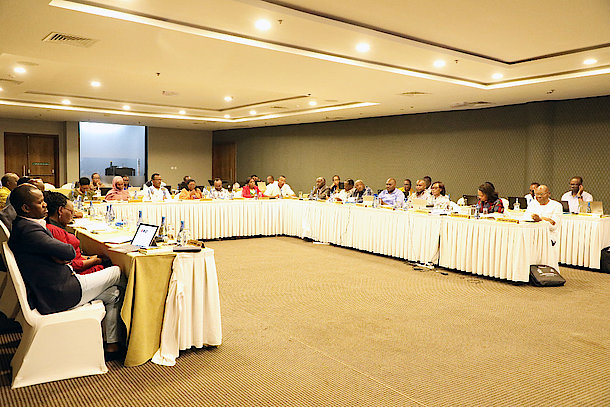 From 27 to 30 July 2022, Senators are holding a retreat to exchange ideas to further improve their achievements regarding their mandate. The retreat is taking place in the District of Nyagatare.

The President of the Senate, Dr Iyamuremye Augustin said that even though the Senate has made many achievements, there is still room for improvement mainly on the particular responsibility of the Senate to “monitor the application of the fundamental principles” and organising regular outreach programs to the citizens and being a “think-tank” institution.

“The Bureau of the Senate adopted to organise the retreat of Senators to exchange ideas on achievements made during the two-and-a-half-year 3rd term of office, to reflect on the challenges and find ways we can further improve ways of discharging our tasks.” Dr Iyamuremye Augustin added.

Senators will be discussing the particular responsibility of the Senate which is to monitor the application of the fundamental principles as specified in Article 10 of the Constitution, the amendment of the organic law determining the functioning of the Senate, the implementation of the National Strategy for the Transformation (NST1) and the role of the Senate in its implementation.

At the end of the retreat, it is expected to have a fruitful outcome with a common understanding and strong vision regarding the mandate of the Senate, suggestions on amending the organic law determining the functioning of the Senate to facilitate Senators to fulfilling their duties.

On the last day of the retreat, Senators will join the residents of Nyagatare District in a monthly community work Umuganda the month of July, and subsequently, they will interact with the residents on various issues of daily life. (Fin)