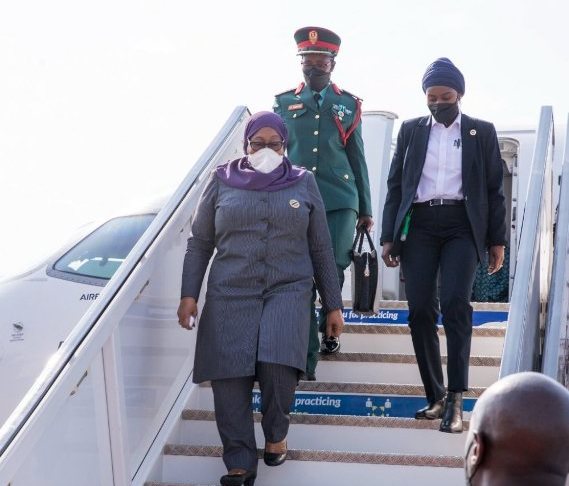 The President of the United Republic of Tanzania, Mrs. Samia Suluhu Hassan, has already arrived this morning in Rwanda for a two-day official visit, and she was received at Kigali Airport by the Minister of Foreign Affairs, Dr Vincent Biruta.

Today at Urugwiro Village, President Kagame will receive President of Tanzania Samia Suluhu Hassan, for her first visit to Rwanda. The first day of her two-day State Visit, will begin with a tête-à-tête between the two Heads of State, followed by bilateral talks.

The Heads of State will then address members of the press and witness the signing of several bilateral agreements.

In the evening, President Kagame will host President Suluhu Hassan and her delegation for a State Banquet at the Kigali Convention Centre.

On Tuesday, 3 August 2021, President Kagame and President Suluhu Hassan will visit several companies in various sectors including the Special Economic Zone which is home to 120 companies with activities ranging from manufacturing, agro-processing and education among others. To date, the SEZ has generated 800 million USD in exports and created 13,000 jobs.