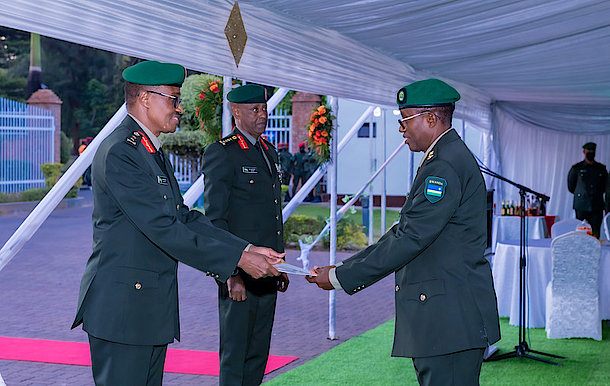 Rwanda Defence Force (RDF) has for the tenth time held a send-off ceremony to honour the service of Military personnel who reached retirement age and those whose service contracts came to an end.

The official send-off event was held at RDF Headquarters, Kimihurura and presided over by the Minister of Defence, Maj Gen Albert Murasira on behalf of the Commander-in-Chief of RDF.

Maj Gen Murasira applauded the retirees and their families for their dedication, sacrifice and noble service to the country.

On behalf of the retirees, Maj Gen Ferdinand Safari thanked the President of Rwanda and Commander-in-Chief of Rwanda Defence Force for his good leadership and guidance in shaping a strong RDF family.

He emphasised that though they are retiring, they are still attached to RDF family and will continue to work for the development of Rwanda.

The retirees were awarded certificates in recognition for their service rendered to Rwanda Defence Force. (End)