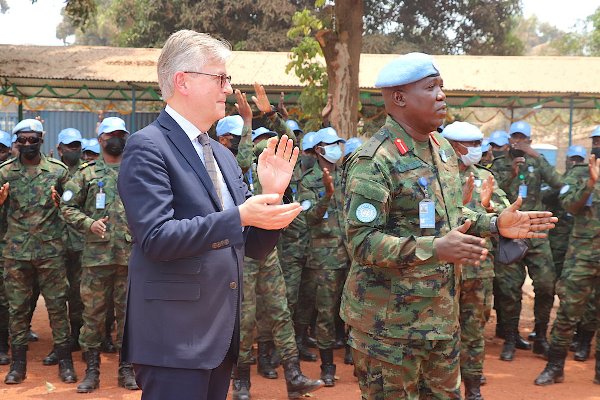 He was received by the Contingent Commander Col Augustin MIGABO who briefed him on Rwabatt8 operations and the challenges faced since they deployed to CAR on 17 April 2021.

Ambassador Jean Pierre La Croix congratulated Rwandan peacekeepers for their role in restoring peace and security in CAR despite the challenges of COVID-19 pandemic.

“We are all impressed and very grateful for the outstanding performance of Rwabatt8, and entire Rwandan peace keepers who have a good record of conduct and discipline in peacekeeping operations.”

He further encouraged Rwabatt8 to remain resolute in the enforcement of the MINUSCA mandate.

After interacting with troops, Ambassador Jean Pierre Lacroix also planted the tree as a symbol of peace and support to environment conservation initiatives.