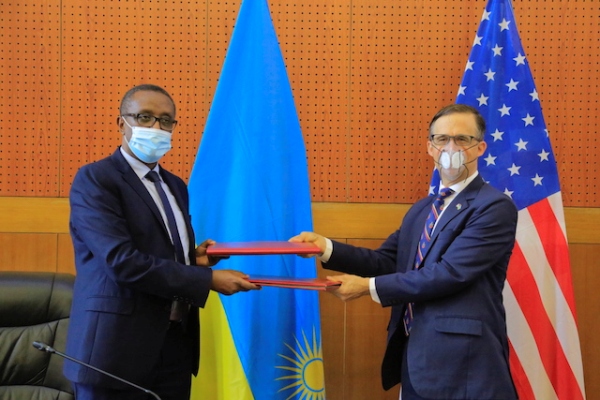 Kigali: Rwanda and the United States of America have today signed the Status of Forces Agreement (SOFA) that will strengthen the existing good military cooperation between the United States of America and Rwanda. The signing ceremony was held on 28 May 2020 at the Office of the Ministry of Foreign Affairs and International Cooperation, in Kimihurura.

The Minister of Foreign Affairs and International Cooperation, Dr Vincent Biruta who signed the Agreement on behalf of Rwanda noted that the signed Agreement is broader than the existing one.

“This SOFA that we are signing today will be broader than the 2005 agreement and will cover U.S Personnel and US contractors who may be temporarily present in the territory of the Republic of Rwanda in connection with ship visits, training exercises, humanitarian activities, and other activities as mutually agreed’’, he said.

On the other side, Mr. Peter Vrooman, US Ambassador to the Republic of Rwanda said: “The signing of this agreement marks another milestone in strengthening the military cooperation between our two countries which has seen a significant rise, exemplified by the signature of the State Partnership Program with the State of Nebraska and its National Guard on December 12th, 2019,”

The signing ceremony was also witnessed by Hon Minister of Defence, Maj Gen Albert Murasira, Ambassador Guillaume Kavaruganda, the Director-General in charge of Europe, Americas, and International Organisations and Maj Gen Ferdinand Safari, Director-General in charge of Policy and Strategy at the Ministry of Defence. Rwanda and the United States have maintained positive defence cooperation for a number of years. (End)