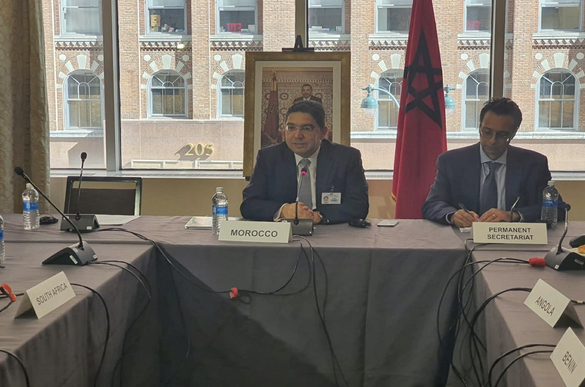 Speaking at the ministerial meeting of African Atlantic States, Mr Bourita stressed that the reactivation of this geostrategic alliance expresses the vision and commitment of His Majesty King Mohammed VI, to make the African Atlantic space a framework for pragmatic and timely interstate cooperation.

“Our meeting last June and the Rabat Declaration that came out of it, have materialized this vision, establishing the Atlantic area of Africa as a space of peace, stability and shared prosperity,” he noted.

In this regard, he stressed that through the Rabat Declaration, the Atlantic African States have demonstrated the strong ambition to place joint action in the framework of a broader partnership and deepen the links of integration, in order to confront more effectively the challenges of the region and to identify the great potential for cooperation.

Mr Bourita further noted that these states have agreed that joint actions are guided by the principles of consultation, solidarity and a dynamic and enterprising South-South cooperation, noting that the international context, which has rarely been as complex as today, reinforces the relevance of this initiative.

“It also commits us to respond to the imperative of consolidating our partnership. Especially since we are facing the same challenges and we share the same concerns, including security, stability and sustainable development, “he explained.

Highlighting the complex, interconnected and multidimensional threats facing the region, the Minister warned of terrorist threats that are spreading in several parts of Africa with “very negative” repercussions on the stability of the region.

“An effective fight against terrorism requires an integrated approach aimed at actions both in terms of security, promoting the ideals of tolerance and achieving sustainable development,” he said, adding that the situation regarding transnational organized crime in the region is also very worrying.

“Illicit trafficking in arms, drugs or human beings are developing very quickly and threaten peace and development in the Atlantic African space,” he warned.

Mr Bourita also warned against the threats posed by piracy, which “harm the prospects of economic development and trade of countries in the region,” saying that the direct and indirect cost of piracy in the Gulf of Guinea would approach two billion dollars annually, and this figure does not include all the costs borne by African countries and their partners.

The Minister also noted that the intertwining of terrorism, separatism and transnational organized crime, multiplies the threat by creating an “alliance of evil forces”. “No country can meet, alone, these challenges,” he stressed, calling for pooling efforts, through cooperation and coordination, is necessary.

Referring to the prospects for cooperation, Bourita highlighted the immense opportunities for partnerships in the region in the areas of blue economy, maritime cooperation, as well as energy.

“The blue economy is projected to bring $ 3,000 billion in value added annually to the global economy by 2030, and our region has a huge potential in this area,” he noted, indicating that maritime cooperation is also an asset, “which would allow us to strengthen our economic integration and trade and improve our competitiveness in the global economy.

Regarding the environmental challenges facing the region, Bourita said that efforts to address these challenges are part of the dynamics of economic cooperation in this area, recalling that the African continent, which contributes to 7% of greenhouse gas emissions, is the most vulnerable to the effects of climate change.

“The initiatives of the African Action Summit, held on the sidelines of COP22 in Marrakech in 2016, on the emergence of Africa through climate action, are among the appropriate actions for our collective fight against climate change,” he argued, adding that the search and promotion of international partnerships is desirable to support efforts and build capacity to meet the challenges and take advantage of cooperation opportunities.

In this context, he said that a draft Program of Action of this Initiative aims to identify common strategic priorities for the realization of the vision of an effective and inclusive Atlantic African partnership, noting that this project is a unifying element to “unite us around common goals, and guide us in our collective actions.

The Agenda for Action also serves as a basis for the preparation of the action plans of the three thematic groups created by the Rabat Declaration, dealing with political dialogue and security issues; the blue economy, maritime connectivity and energy as well as sustainable development and the environment, continued the Minister.

He added that today’s meeting will be sanctioned by a declaration, reaffirming the common will to “consolidate our partnership and to give impetus and guidance to our future collective actions, including the Program of Action and the work of the three Thematic Groups.

The Minister strongly encouraged the Member States of this partnership to designate the Focal Points of this Draft Program of Action, to start forging the common agenda and harmonizing actions.

This meeting was held on the sidelines of the 77th United Nations General Assembly.