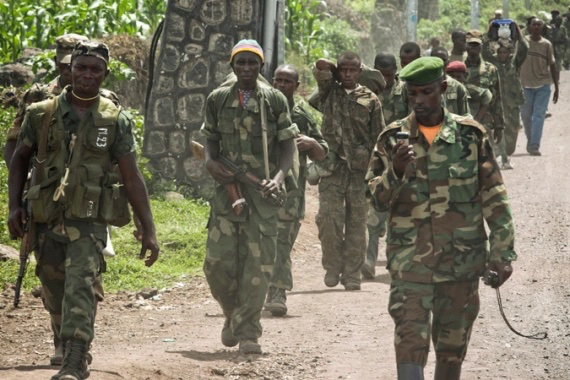 With a brutal history of violence now threatening to repeat itself in the Democratic Republic of the Congo, senior officials briefing the Security Council today urged members to lend their steadfast support to regional efforts aimed at curbing the resurgence of militia attacks in the country’s eastern provinces, while warning of dire humanitarian implications for the broader Great Lakes region.

The recent spate of violence in the eastern Democratic Republic of the Congo includes a fresh round of attacks by the infamous March 23 Movement armed group, better known as M23, which was most active between 2012 and 2013.  The Council condemned an attack by the group on peacekeepers with the United Nations Organization Stabilization Mission in the Democratic Republic of the Congo (MONUSCO), on 22 May, in a recent Press Statement.

Martha Ama Akyaa Pobee, Assistant Secretary-General for Africa in the Departments of Political and Peacebuilding Affairs and Peace Operations, in her briefing, stressed:  “It is imperative that this Council lend its full weight to ongoing regional efforts to defuse the situation and bring an end to the M23 insurgency, once and for all.”  Noting that the M23’s hostile actions against both MONUSCO and the Armed Forces of the Democratic Republic of the Congo constitute serious threats to the region’s stability and security, she said the situation remains volatile.  The humanitarian impact of the recent attacks has been significant, with at least 75,000 people internally displaced and more than 11,000 having crossed the border into Uganda as of 30 May.

Against that backdrop, she said urgent action is needed to de-escalate the current crisis — especially in support of regional efforts spearheaded recently by the Heads of State Conclave, in Nairobi.  The two-track process launched there – which extends a hand to armed groups, while demanding that they lay down their arms – has provided fresh impetus to bring fighters into Kinshasa’s Demobilization, Disarmament, Community Recovery and Stabilization Programme.  In that vein, she reiterated calls on all local armed groups to participate in the process without preconditions, and on all foreign armed groups to immediately disarm and return to their home countries.

Huang Xia, Special Envoy of the Secretary-General for the Great Lakes region, briefing the 15-nation organ via video teleconference, recalled that a decade ago M23 caused a crisis in the Great Lakes region, which was exacerbated by reciprocal accusations between the Democratic Republic of the Congo and its neighbours.  Warning that history seems to be repeating, he said everything possible must be done to avoid a new escalation with immeasurable humanitarian, security and political consequences.  Urging all armed groups to lay down their arms and resolutely engage in the Nairobi political dialogue, he said a military approach alone will not be enough to bring lasting peace.  Collective political commitments must also continue, and all available bilateral and regional mechanisms must be mobilized.  “The region does not need a new crisis – let us keep the channels of dialogue open at all levels […] and preserve the progress made in recent years,” he said.

In the ensuing discussion, Kenya’s representative, also speaking for Gabon and Ghana, said that the fate of the Democratic Republic of the Congo – bordering nine countries in the heart of Africa – will, in many ways, determine the future of the region.  Commending the Government for commencing an Inter-Congolese Peace Dialogue, he welcomed the armed groups participating in the dialogue and spotlighted their courage and commitment to peace.  All parties must take ownership and protect that process, he emphasized, noting that poverty remains a root cause of instability in the east of the Democratic Republic of the Congo, despite an abundance of natural resources….(End)