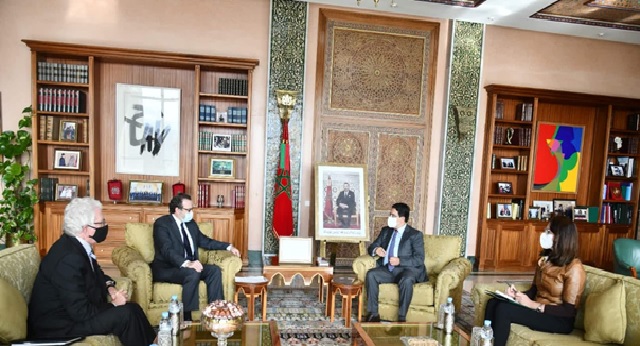 The United States welcome the continued and valuable leadership of His Majesty King Mohammed VI, Que Dieu L’Assiste, in addressing issues of common interest such as peace in the Middle East and stability, security, and development across the region and the African continent, U.S. Assistant Secretary of State for Near Eastern Affairs, Mr David Schenker, said on Monday 19 October 2020, in Rabat.

The Kingdom is a “close partner” of the United States in a range of security-related issues. It participates annually in more than 100 U.S. military engagements yearly including Operation African Lion, Mr Schenker told reporters following talks with Minister of Foreign Affairs, African Cooperation and Moroccan Expatriates, Mr. Nasser Bourita.

Part of his recent visit to Morocco, U.S. Secretary of Defense Mark Esper signed a ten-year Roadmap for Defense cooperation (2020-2030), “a symbol of our long term and strategic cooperation,” David Schenker added.

He also recalled that Morocco is the only African country to be associated with the United States under a free trade agreement, adding that the Kingdom, gateway to the continent, is home to more than 150 American companies that offer significant employment opportunities.

The two countries will celebrate next year the 15th anniversary of the entry into force of this agreement, which has contributed to the intensification of bilateral trade, he said.

Next year, the two countries will also celebrate 200 years of friendship and mark the bicentennial of the American Legation in Tangier, the oldest U.S. diplomatic property in the world, underlined the U.S. official who was accompanied by the U.S. Ambassador to Morocco, David T. Fischer.

He stressed that his meetings with Mr. Bourita were an opportunity to discuss the ways to strengthen the “strategic partnership” between the two countries, which is already anchored under the leadership of HM King Mohammed VI, noting that the two countries are working together to address the coronavirus (Covid-19) pandemic.