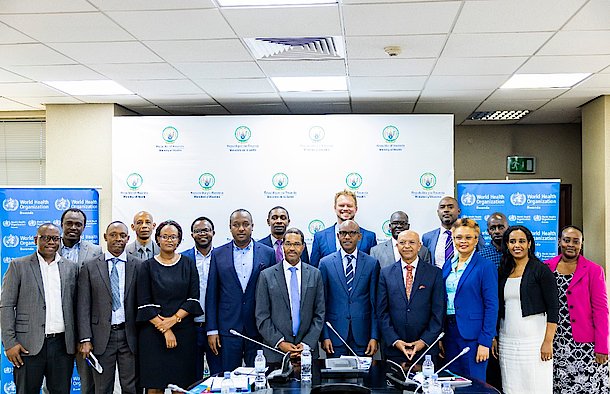 The previous two years have been of colossal effort in public health due to the outbreak of the Covid-19 pandemic.

A lot of reviews have been conducted to see how well governments and other health actors have responded to the health crisis and coordinating emergency responses.

It is in this framework that the government of Rwanda and the World Health Organization have come up with three flagship initiatives to scale up their capacity in emergency response.

The five-year initiatives were launched during a high-level meeting between the Ministry of Health and WHO AFRO team alongside other partners.

According to WHO AFRO, the three flagship initiatives will initially be implemented in few selected countries, and later be scaled up regionally.

Rwanda has been selected to participate in the pilot process of the three initiatives.

Dr. Tharcisse Mpunga, the State Minister in charge of Primary Healthcare said that the interventions will boost the capacity of Rwandan health sector institutions and scale up their capability to better prepare against any health emergency.

In addition, Mpunga pointed out that over the past two years, there have been various lessons learned and challenges the country faced in terms of readiness in combating the pandemic amidst the global outbreak of Covid-19.

Minister Mpunga further stressed the impact of a multi-sectorial approach in responding to the pandemic, saying that the initiatives will help them in detecting, preparing, and responding to any pandemic.

He revealed that the UN agency will allocate $1 million complementing the government’s part in fighting emergencies.

Then ‘Prepare’ Flagship or Promoting Resilience of System for Emergencies (PROSE) that aims to strengthen the ability of countries to plan and anticipate choc events.

Lastly, the ‘Response’ Flagship: Strengthening and Utilizing Response Groups for Emergencies (SURGE) which aims at ensuring governments are equipped to mobilize resources and respond to public health emergencies within the first 24-48 hours.

Commenting on the initiatives, Dr. Brian Chirombo WHO country representative to Rwanda pointed out that the world passed through a hard time due to the Covid-19 pandemic and the assessments were done to see how we responded globally and how WHO did its part in terms of coordinating emergency response.

Speaking on the origin of this initiative, he disclosed that it originated from the assessments done during the Covid-19 pandemic and the role of WHO in restoring health access.

“That is how the idea of strengthening the African health capacities came about”.

In addition, he said that in terms of preparedness, lockdowns among other pandemic restrictions have shown that countries have to be strong and have expenses.

“WHO has come up with such initiatives basically to make sure that the country can be able to detect public health emergencies quickly and secondly be prepared for anything that comes and finally respond to it,” he said

Moreover, Chirombo pointed out that the responding party will cover different areas of the health sector.

Chirombo also pointed out that WHO and government will sign an MoU which shows the commitment of the two entities in implementing these initiatives and also look at other partners that can be brought on board.

A high-level WHO AFRO mission was in the country on a scoping mission for this initiative from September 19 to 23, 2022 and will hold meetings with partners to introduce the flagship initiatives. (End)