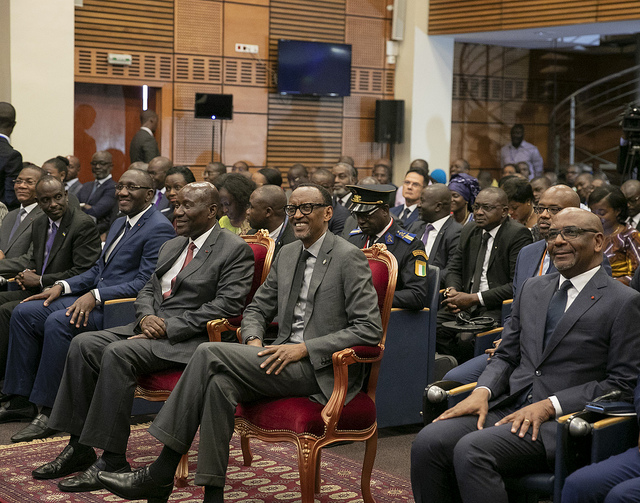 Kigali: President Kagame said on Thursday that Africans have the capacities to change the continent from being a permanent recipient of the other’s generosity as he addressed members of the private sector in Abidjan, Côte d’Ivoire.

The discussion on free trade and industrialisation was held on the second and the last of the two-day State visit President Kagame and First Lady Jeannette Kagame held in Abidjan, Côte d’Ivoire to further strengthen diplomatic and economic relations between the two countries.

“Why should Africans survive on the kindness and generosity of foreigners? People in this room have different backgrounds, have learned and taught in universities abroad. Why not use this to change our situation? Africans have the capacities to change our continent” President Kagame said.

Commenting on the recently concluded High level forum Africa-Europe in Vienna, President Kagame said the two continents should build a partnership of equals.

“It was a continuation of the good discussion held at Abidjan AU-EU summit. It’s important for Africa and Europe to relate to each other in a partnership of equals, not where one is a permanent recipient of the other’s generosity” President Kagame said.

On attracting investments to Rwanda, president Kagame said Rwanda created an environment that is conducive to business with adequate measures to fight corruption, promote accountability and transparency.

“We created an environment that is conducive to business, if you want to bring your money to Rwanda, you know what to expect. We have emphasized regional integration, as part of the East African Community. Rwanda is an entry point to a larger market of 150-170 million people. That’s the beauty of integration, together we are bigger than we are alone. We have worked to make people interested in investing with us and in us. It takes 6 hours to register a business, used to be 90. And many other reforms, efficiency and transparency. You have to take the fight to the big guys. We hold everyone accountable. We have an Ombudsman. Everyone makes a wealth, declaration starting with the president. I am usually one of the first to submit my forms. Along the way we have demonstrated that people will be held responsible” President Kagame said.

On Home-Grown Solutions, President Kagame said that Rwandans sought solutions from within their values and traditions to address a number challenges the country faced, including using Gacaca courts to try Genocide cases, reiterating that there are solutions within African traditions, and that countries can learn from each other.

President Kagame further reiterated that women constitute 52% of the Rwandan population therefore it was their right to participate in the country’s development, not a favour.

Earlier during the day, President Kagame was awarded Honorary Citizenship of the City of Abidjan, handed over a ceremonial City key by the Governor, and welcomed by the traditional chiefs of Côte d’Ivoire.

President Kagame’s visit follows a three-day visit to Rwanda that Ivorian President Alassane Ouattara conducted late April 2018. One of the key areas of cooperation between Rwanda and Côte d’Ivoire has been the signing of a Bilateral Air Service Agreement (BASA) that resulted in RwandAir’s flights to Abidjan starting in October 2016. .”(End)