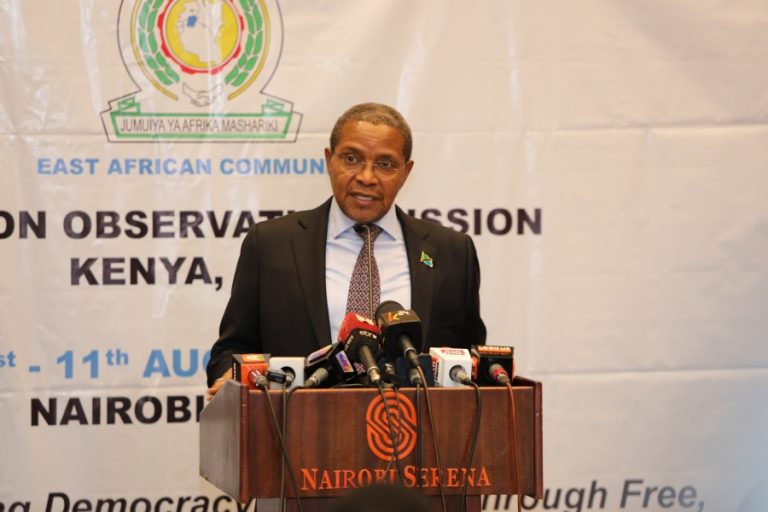 The Head of the EAC Election Observation Mission is Jakaya Mrisho Kikwete, former President of the United Republic of Tanzania.

Dr. Kikwete announced the mission comprises 52 observers drawn from key governance and independent institutions and civil society organizations across the EAC Partner States except Kenya. The mission is in the country from 1st August 2022 and is set to depart on 12th August, 2022.

“We are here to assess the level of preparedness of the key electoral stakeholders for this election. We are also looking at the level of compliance of the electoral processes and management to the international, regional and national established laws, principles and practices,” he said.

Dr. Kikwete further said that the EAC Observer Mission will assess the adherence to the democratic principles of the EAC as enshrined in the Treaty.

“We are committed to offer objective recommendations for continuous improvement for the conduct of this general election,” he said Dr. Kikwete.

The mission will build on the outcomes of the Joint African Union/EAC/IGAD/COMESA pre-election assessment conducted over the last one month.

H.E. Kikwete said that the mission will interact with a number of key stakeholders in pursuit of peaceful elections. Among these will be IEBC, political parties, candidates, the judiciary, security organs, media and civil society.

The EAC will then announce the findings of the mission through an Interim Statement on 11th August, 2022.

The EAC Secretary General, Dr. Peter Mutuku Mathuki, in remarks read on his behalf by the EAC Principal Political Affairs Officer, Mr. David Onen, said that EAC´s mandate to observe elections in Partner States, is governed by the Treaty and the EAC Principles for the Observation and Evaluation of Elections.

“As a region, we have a conviction that regional observation is critical to enhancing the credibility of the elections, reinforcing the work of domestic observer groups and enhancing public confidence in the entire electoral process,” he said.

Dr. Mathuki reaffirmed EAC´s commitment to strengthen governance and enhance the culture of democracy as a fundamental principle of the Community.

“The Treaty under Article 6 (d) requires the Partner States to uphold “good governance including adherence to the principles of democracy, the rule of law, accountability, transparency, social justice, equal opportunities, gender equality as well as the recognition, promotion, and protection of human and people’s rights in accordance with the provisions of the African Charter on Human and People’s rights,” said Dr. Mathuki.  (End)