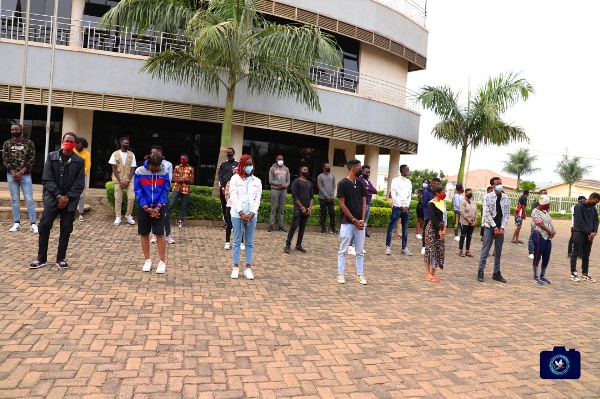 People who were caught in City of Kigali violating COVID-19 preventive measures.

Rwanda National Police (RNP), on Monday, March 1, paraded to the media 37 people who were caught in City of Kigali violating COVID-19 preventive measures.

Twenty-seven of the violators were found in unregistered guest house located in Kibagabaga, Kimironko Sector of Gasabo District, where they were shooting a movie.

Other 10 violators were found in Kimironko where they were holding a house party. The film director, Theogene Tuyizerekuki, who was also among the arrested shooting the movie.

“Police caught us in the Guest House on Sunday, we had flouted the national COVID-19 preventive measures to conduct a gathering that is prohibited. Some of us were at the time not wearing face masks, no social distancing and we had not informed any authorities about this shooting. We regret such inappropriate actions,” Tuyizerekuki said.

“[Nine] friends visited me and we decided to continue partying and drinking when they realized that it was too late to go back to their respective homes because it was already within hours when movements are prohibited,” Ndayisenga said.

RNP spokesperson, Commissioner of Police (CP) John Bosco Kabera warned against such errant behavior especially by the young people, who expose themselves and put lives at risk of getting infected and spreading the virus.

“We have conducted awareness campaigns on preventive measures including prohibited gatherings and visits. It is unfortunate that we can still witness such violations. However, we also appreciate the role of the majority people, who observe these health guidelines and report such violations,” CP Kabera said.

He added that the violators were arrested at about 11pm in prohibited gatherings, they were congested with no masks and in hours when everyone is supposed to be home.

“No one should entertain such reckless behavior which can be the source of further COVID-19 spread.” The violators will be fined and subjected to COVID-19 test at their own cost. (End)