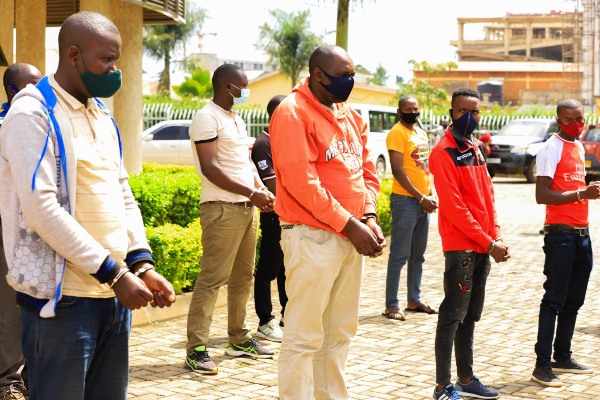 The suspects include six men, who were forging and selling driver’s licenses as well as three drivers and motorcyclists, who were using forged permits.

Some of those caught with forged driver’s license paid between Frw400, 000 and Frw550, 000 to acquire the fake permits.

Some of the paraded suspects who were masquerading as Police officers attached to the Traffic and Road Safety department within the Rwanda National Police.

Epimaque Bimenyayabo, a resident in Gicumbi District, is one of those arrested with a forged permit. He argued that after failing practical tests several times, he was tricked to believe that he can buy one.

“Someone told me to pay Frw550,000 after assuring me that I will get a valid driver’s license. I sold my cow, paid the money little did I know that I was paying for a forged permit. I was arrested when I went to Police to report the theft of my motorcycle,” Bimenyayabo said.

Also arrested in Muko Sector, Gicumbi District is one Jean Baptiste Nsabimana, who had paid Frw150, 000 for a forged provisional permit.

Nsabimana said that he was supposed to pay Frw400, 000 for both provisional and definitive driver’s license. He accused one Maniriho (also arrested) of knowingly selling him a forged permit.

“Maniriho was my friend; at least I thought I was paying for something genuine. I was supposed to pay Frw400000 in total but I first gave him Frw150000 as advance payment. Later on April 12, he came back with another man, who was guising as a Police officer and told me that my provisional permit was out and that I should pay the remaining balance to have both the provisional and definitive permits,” Nsabimana narrated.

Nsabimana was arrested as he came to pick his permit from the Police impersonator, whom, by that time, was already in the Police custody.

Among the arrested include one Eric Kayiranga, who was masquerading as a Police officer in the racket. Kayiranga is an instructor at one of the driving schools in Kigali.

RNP spokesperson, Commissioner of Police (CP) John Bosco Kabera advised people to seek lawful businesses and to go through legal channels instead of taking criminal shortcuts and ending up spending many years in prison.

“We have previously arrested many people in these criminal activities and warned against the same; here we are today with other people, who turned a deaf ear. Everyone engaged in these criminal acts, either selling forgeries or using forged permit will be arrested in one way or another,” CP Kabera warned.

“As usual, when Police gets information on any suspected criminal practice, we follow up and that is how this specific group was unearthed after it emerged that they were producing fake driver’s licenses and selling them to people, who thought they were dealing with Police officers and who were convinced that they would get the licenses through such criminal shortcuts,” CP Kabera said.

“The arrrested suspects will be handed over to Rwanda Investigation Bureau (RIB) for further legal process.”

Under law No 68/2018 of 30/08/2018 determining offenses and penalties states that, any person who, by deception, obtains another person’s property, whole or part of his/her finance by use of false names or qualifications, or who offers positive promises or who threatens of future misfortunes, commits an offence.

Article 276 of the same law states that any person who, with fraudulent intention, produces a false written document, causes to write false statements or produces a conflicting declaration, is considered to commit the offence of forgery.