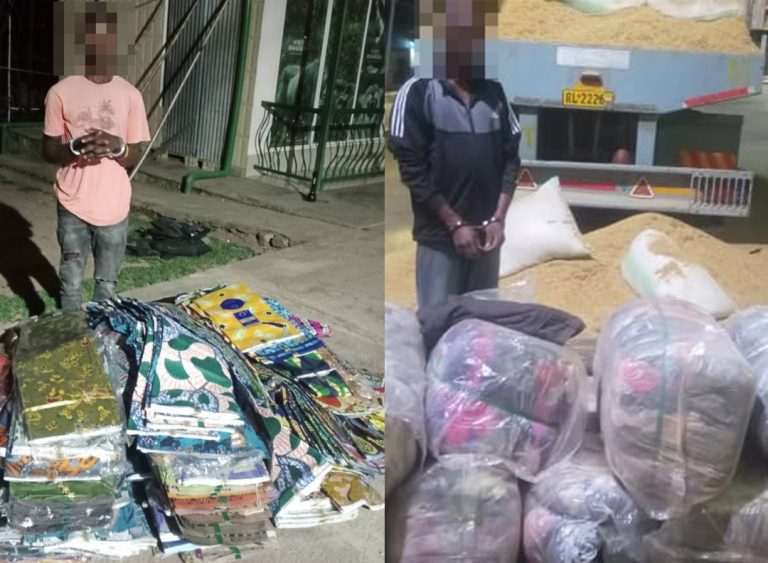 Thirteen bales of second-hand clothes and 410 pieces of traditional garment commonly known as kitenge, were intercepted on Saturday, August 13, from two suspected smugglers, who were also arrested in two separate Police operations conducted in Rusizi District.

Chief Inspector of Police (CIP) Rukundo Mucyo, the Western Region Political and Education Officer (RPCEO), said that the 13 bales of used clothes locally known as caguwa, were being smuggled in a vehicle, Benz RAE 589A/RL2226, which was intercepted at about 4am, by the Revenue Protection Unit (RPU) in Murindi Village, Ruganda Cell, Kamembe Sector.

The driver of the truck identified as Amran Nzeyimana, 52, was also arrested.

The 410 pieces of kitenge garments, he added, were seized from the house of one Damascene Ndagijimana, 25, also arrested, in Gihundwe Sector.

“The RPU had information that the vehicle Benz RAE 589A/RL2226 from Rusizi en route to the City of Kigali driven by Nzeyimana, was carrying bales of second-hand clothes smuggled from Democratic Republic of Congo.

In response to the information, a checkpoint was mounted in Murindi where the vehicle was intercepted carrying 13 bales,” CIP Rukundo said.

In another foiled smuggling, he added, residents provided information that Ndagijimana had sneaked into Rwanda quantities of Kitenge garments from DRC to his home in Mutara village, where Police recovered 410 pieces and took him into custody.

He warned of increased operations facilitated by strong cooperation with the public.

In article 199 of the East African Community Management Act, which is also applicable in Rwanda, smuggled goods and automobile used in smuggling, are auctioned.

A taxpayer, who commits fraud, is also subject to an administrative fine of one hundred percent (100%) of the evaded tax and a likely imprisonment of between six months and two years. (End)