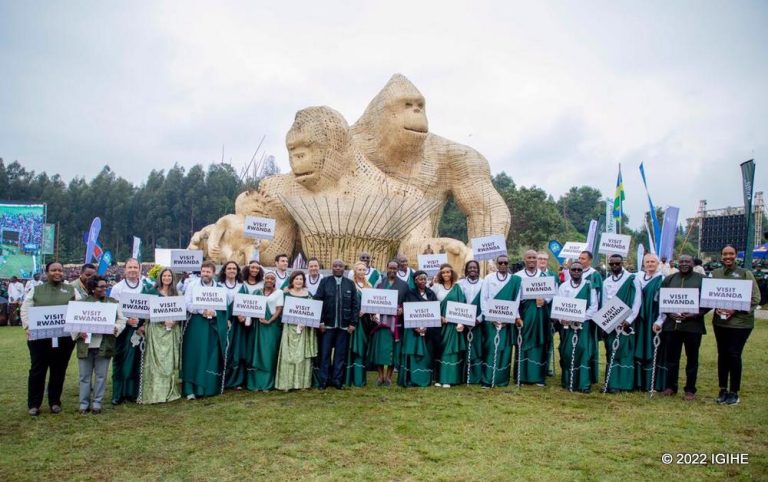 The globally recognised conservation event was attended by a host of distinguished guests including His Royal Highness The Prince of Wales who joined virtually, global leaders, philanthropists, conservation champions as well as sports, music and fashion icons. Renowned scientist and conservationist Dr Jane Goodall also shared a message to mark the occasion.

The Prime Minister of Rwanda, Édouard Ngirente, was the event’s Guest of Honour, and was joined by the First Lady of Rwanda, Mrs Jeannette Kagame.

“The act of giving a name to baby gorillas is a symbol of Rwanda’s commitment to these majestic animals, and our belief in the power of nature to be a force for socio-economic transformation. Today, Rwanda is home to one third of the world’s remaining mountain gorillas and the population is increasing every year.”

“Our natural ecosystems and national parks represent an important natural and cultural heritage that we hold in trust for future generations. Our key challenge now, and in the future, is to sustain and maintain these natural ecosystems,” he said.

During her remarks, Chief Executive Officer of the Rwanda Development Board, Clare Akamanzi noted:

“In Rwanda, we have witnessed the benefits of deliberate, consistent and comprehensive conservation by the Government of Rwanda, and our valuable conservation partners. In our recent census, the mountain gorilla population had grown by 26% over 6 years. The 20 baby gorillas we have given names to today add to that sustainable future. And the presence of all of you today individually and collectively help to secure their future.”

This baby was born on 29 April 2022 to Agasaro of the Muhoza family of mountain gorillas and was named by His Royal Highness The Prince of Wales. The name was chosen to raise awareness of the need for humanity to come together as one to protect our environment and achieve sustainable development.

Born on 15 September 2021 to Ubuntu of the Igisha family of mountain gorillas, this baby was given a name by international football referee Salima Mukansanga. The name was chosen to highlight the role liberation has played in conservation as a foundation of sustainable tourism and development.

This male baby gorilla was born on 21 January 2022 and was named by Stewart Maginnis, the Deputy Director General of the International Union for the Conservation of Nature (IUCN). The name was chosen to celebrate the protective nature of the mountain gorillas, and their role as guardians of their forest habitat.

Akamaro’s daughter from the Kureba family of mountain gorillas was born on 12 October last year and was named by Professional Racing Driver and Presenter, Naomi Schiff. The name was chosen to celebrate the unwavering commitment of the Rwandan people to the protection of the mountain gorillas.

This new addition to the Pablo mountain gorilla family was born on 9 December 2021 and was given a name by Sir Ian Clark Wood, KT, GBE, Chairman of The Wood Foundation. The name was chosen to celebrate the efforts of communities and conservationists to protect and ensure the integrity of Rwanda’s biodiverse national parks.

Named after the Chairman of the Rwanda Development Board, Itzhak Fisher’s Father-in-Law, a Holocaust survivor who was called Leo, which means lion, this male baby gorilla was born on 1 August 2022 and is a new member of the Hirwa family. The name was also chosen by Itzhak Fisher to recognise an important conservation milestone in Rwanda, the successful reintroduction of lions in Akagera National Park.

This name was given to Nsanganira’s son of the Ntambara family of mountain gorillas by Philanthropist and Entrepreneur, Dr. Cindy Descalzi Pereira and chosen to recognize the selflessness and dedication of park staff, local communities and conservation partners to the conservation of biodiversity.

The Board Director, Sales and Marketing, Volkswagen Group South Africa & Sub-Saharan Africa, Thomas Milz gave this name to a male baby mountain gorilla from the Noheli family that was chosen to recognize the welcoming nature of Rwandans, and the famous Rwandan hospitality visitors enjoy when visiting the country.

Umutuzo’s son that was born in May this year was given this name by legendary Senegalese musician, Youssou N’Dour. The name was chosen to showcase Rwanda as a vibrant hub for music, fashion and culture, as well as eco-tourism and investment.

Umwe’s daughter from the Noheli family was given this name by Paris Saint-Germain football legend, Juan Pablo Sorin to recognise the admirable and noble nature of Rwanda’s mountain gorillas. She was born on 13 December 2021.

This name was chosen to highlight the resilience of the Rwandan people and the protection of the country’s biodiversity. It was given to Igitangaza’s daughter of the Mutobo group of mountain gorillas by the Chief Executive Officer of the African Wildlife Foundation, Kaddu Sebunya. The baby gorilla was born on 13 September 2021.

The Secretary General of La Francophonie, Louise Mushikiwabo, had the honour of giving this name to a newborn baby gorilla from the Ntambara family to highlight the importance of working together to achieve successful conservation outcomes, and to recognise the many partners who contribute to protecting the mountain gorillas.

Veterinarian and Television Presenter, Dr Evan Antin gave this name to a baby mountain gorilla from the Susa family. It is a name that celebrates Rwanda’s protected areas as sanctuaries of rich and unique biodiversity, and is a call to protect wild places all around the world.

Chosen to highlight the value Rwanda attaches to preservation and conservation, this name was given to Ubufantanye’s daughter from the Musilikare family of mountain gorillas born on 15 August 2021 in Volcanoes National Park. Neri Bukspan, the Managing Director of Standard & Poor’s Credit Market Service was honoured to give the name to the baby.

Laurene Powell Jobs, Founder and President of Emerson Collective gave this name to Umwari’s baby gorilla from the Susa family in honour of the late Dr Paul Farmer – a great friend to Rwanda and a great friend to Laurene. Paul’s vision for a more just and equitable world lives on through the University of Global Health Equity and Partners in Health.

Founder and President of Luntz Global, Dr. Frank Luntz gave this name to a male baby gorilla from the Susa family. The name was chosen to celebrate the sustained life of mountain gorillas, and their bright future thanks to conservation efforts.

Chosen to represent the joyful and entertaining nature of gorillas, this name was given to Umuco’s daughter who was born on 4 August 2021. American actor, Uzo Aduba had the honour of naming her during today’s Kwita Izina Gorilla Naming ceremony.

Arsenal Football Club Legend, Gilberto Silva, gave the name to Umutungo’s son from the Sabyinyo family of mountain gorillas. The name was chosen to serve as a call to action for us all to play our part in protecting and restoring biodiversity.

With the growing need to expand the mountain gorilla habitat through the Volcanoes National Park Expansion Programme, this name was given to a male baby gorilla born on 12 October 2021 by Moses Turahirwa, Creative Director of Rwandan fashion brand, Moshions.

Football legend Didier Drogba gave this name to a male baby gorilla that was born on 28 July 2022 to Twiyubake, a member of the Muhoza family of mountain gorillas living in Volcanoes National Park. The name symbolises the importance of the newborn gorillas as “offsprings” of expansion and growth.

Kenyan musical band, Sauti Sol had the honour of naming a newly formed mountain gorilla family living in Rwanda’s Volcanoes National Park as a celebration of the peaceful splitting of the Kwitonda family that left both groups having an equal number of members. Since Kwisanga and Kwitonda were formed, the groups have met a number of times without any aggressive interactions, allowing members from the two families to meet and socialise.

Overall, Rwanda has emerged as a conservation and sustainable tourism leader on the continent. For instance, while in the 2010 Census, there were 480 mountain gorillas, the 2016 Census report indicated 604 individuals in the Virunga Massif. These efforts have contributed to the increase in mountain gorillas worldwide (1,063) and are categorised as no longer critically endangered.