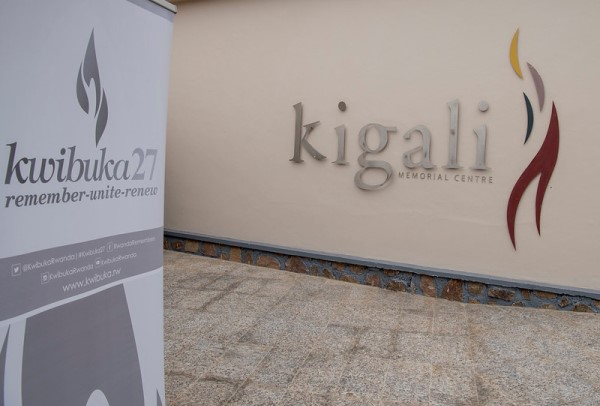 During his address to the participants at the ceremony of the 27th commemoration of the Genocide against Tutsi, HE Paul Kagame, the President of Rwanda said that no one should have the fear to counter those who deny the history of the genocide against Tutsi. He said “For those deniers, if they have no shame, why should I have fear?”

President Kagame also said that Rwanda cannot allow the weight of their history to crush them. He said that “This may be the 27th time we have marked commemoration, but the occasion is never ordinary. There are always reminders of what is at stake. New mass graves are regularly discovered. Many perpetrators still roam free. But we cannot allow the weight of our history to crush us.”

Activities for the 27th commemoration of the Genocide against the Tutsi started this Wednesday April7, 2021 at the Kigali genocide memorial centre in Gisozi where President Kagame and First Lady ignited the Flame of Hope, which determines the future of Rwandans.

Before igniting the Flame of Hope that will be lit for a 100 days, President Kagame and first Lady laid a wreath onto the burial place where more than 259,000 bodies of the victims of the Genocide against Tutsi recovered across the City of Kigali are laid to rest.

The ceremony took place in accordance with guidelines to contain the spread of the Covid-19 pandemic, including the wearing of facemasks and social distancing.

After igniting the Flame of hope and paying respect to genocide victims at the Kigali genocide memorial centre, other activities for the 27th commemoration of the Genocide against the Tutsi carried on at the Kigali Arena where different lectures were attended by high government officials, members of the diplomatic corps and representatives of different categories including members of the private sector, clerics and others.

In a lecture reiterating the ordeals endured by the Tutsi from 1959 until 1994, Dr Jean-Damascène Bizimana, Executive Secretary of the National Commission for the Fight against Genocide (CNLG) said that Remembering is necessary to remind ourselves the truth about our tragic history and avoid what can take us back. As the ancestors said that “A family that does not remember can be easily wiped out”

He also noted that “those who demean and deny the Genocide against the Tutsi deliberately distort the history which characterized it, due to the involvement of some of them or their parents. This confuses the young generation who do not know the history”.

He added that Young people born in a well-governed country are saddened by this history. They do not understand how the previous governments that ruled Rwanda asked people to kill others with whom they shared a country, the reason why Rwanda youth today are involved in the fight against the genocide ideology in all its manifestations, and they are participating in a better struggle to support the good governance in Rwanda, which gives hope for a better future.

The 27th commemoration of the Genocide against the Tutsi will be conducted mostly virtually to contain the spread of Covid-19 pandemic. Most of activities will be followed on radio, television and social media. (End)