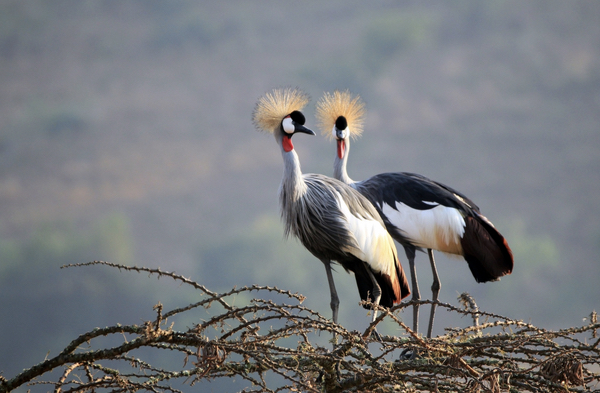 One of Africa’s striking birds, the Grey crowned cranes (Balearica regulorum) are listed on the IUCI red list of endangered species. Up until 2014, they were at the mercy of illegal trade in addition to habitat loss as a result high population density in Rwanda.

In Rwanda, cranes are considered as a symbol of wealth and status thanks to their majestic beauty which exhibits a yellow crown of feathers tipped with a black.

Before 2014 local communities were hunting the birds to sell them to wealthy people and hotels as pets.

Chantal Munyemana, a farmer in Gisagara district in southern parts of Rwanda, was part of a group of poachers who were hunting the migratory grey crowned cranes flying along her neighborhood marshlands.

“We would wake up early in the morning to catch the cranes chicks and raise them for sometimes before selling them to wealthy people as domestic pets”, regrets the 43-year-old mother of four about her past poaching activities. 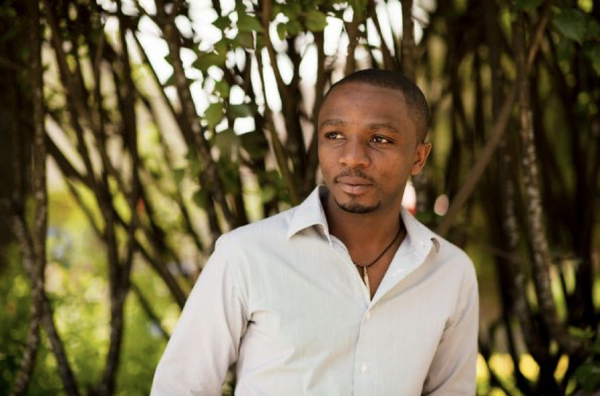 Dr. Olivier Nsengimana, a renowned conservationist, was unhappy about threats cranes were facing and embarked on a journey to rescue them through the Rwanda Wildlife Conservation Association.

Dr. Nsengimana says that it was common to hear cranes calling from people’s gardens or hotel yards, while they were on the brink of extinction in their natural and wild habitats.

A long-time serving manager of a 3-star hotel in Kigali who requested anonymity recalls that particular period of time when the striking birds were moving gracefully around the hotel yards in most stately manner.

“It was exceptional for our guests to conclude their stay without leaving a positive comment about the cranes’ presence in our yards”.

Located in one of Kigali’s wealthy neighborhoods with a good air quality that stems from old trees lining up on the other side of the road, the 3-star hotel was keeping four cranes as pets.

At the time it was not yet popularly known that keeping cranes as pet was forbidden by the law and citizens were generally ignorant to the fact that cranes are an endangered species that should be protected.

However, taking cranes from the wild has been illegal in Rwandan law but many pet owners weren’t aware that it was forbidden by the law.

Cranes owners were unfortunately stressing and malnourishing them ignoring the fact that they were undermining their well-being and sustainability.

“In order to keep cranes from flying away, one strategy that was commonly used by crane owners was to cut their wings”, remorse the hotel manager.

Dr. Nsengimana notes that at the time cranes were dying prematurely and didn’t have a chance to breed and reproduce offspring. 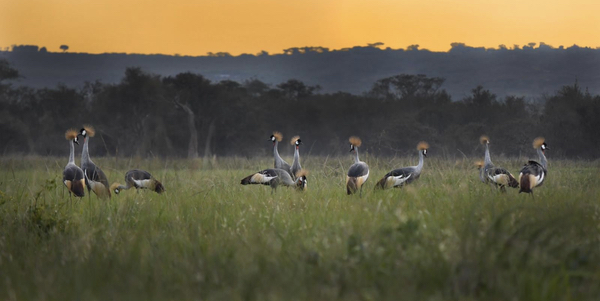 When he was a little boy in his rural home village, Dr. Nsengimana was enjoying walking in nature with his friends and part of the fun was observing wildlife, including Grey Crown Cranes.

One of the things they used to do was to imitate how cranes fly.

“We would make some fake feathers and try to fly like Grey-crowned cranes”, remembers Dr. Nsengimana.

His passion for nature and wildlife stems back to his childhood which inspired him to study veterinary medicine and a career in conservation afterwards.

A mission was born

When Dr. Nsengimana was working as a wildlife veterinarian, he noticed that something was seriously wrong with grey crowned cranes.

“I came to learn that cranes had been hunted over the last 30 years and more cranes were in captivity in people’s garden and hotel yards than in the wild,” he explained.

In association with his close colleagues and friends, Dr. Nsengimana decided to establish a non-profit organization that would save grey crowned cranes from extinction.

Rwanda Wildlife Conservation Association (RWCA) was born in 2015 as a channel through which their efforts to rescue the birds from captivity and release them back to their natural environment.

Jean Ferus Niyomwungeri, who now works as RWCA’s Community Conservation Manager, says that back then the situation was alarming and that it was high time to reverse the trend of Grey crowned cranes extinction.

When Dr. Nsengimana won the Rolex Award in 2014, the 50,000 Swiss Francs award empowered the young organization’s team to take concrete action to stop the illegal trade of cranes and reintroduce them back into their natural habit.

Working closely with the government of Rwanda, RWCA launched a media campaign and amnesty calling citizens to declare any captive crane they had.

“During that campaign, 242 grey crown cranes were rescued from captivity and 319 captive cranes were registered throughout the country,” said Dr. Nsengimana.

As part of that exercise, RWCA’s team assessed the health status of the cranes and fitted them with a unique numbered leg band for easy future identification.

Dr. Nsengimana says that during visits to the homes and hotels where cranes were kept as pets, the team collected detailed information about each crane and educated the owners about laws protecting cranes and appropriate care.

However, the team encountered a number of challenges along the way to finally stop the illegal trade of cranes in the country.

“Some of the challenges we faced were the fact that the owners of grey crowned cranes were not understanding why they shouldn’t keep cranes as pets in their gardens or hotel yards”, remembers the Community Conservation Manager

The team at RWCA raised an awareness on radio and TV to bring people on board with their mission to save the endangered grey crowned cranes from extinction.

The strategy proved itself to be successful and earned the trust of the birds’ owners to join their mission.

The birth of a safe haven for disabled cranes

However, the team of conservationists he put in place during that exercise found out that many cranes in captivity were in poor health or were disabled. Their wings were broken or damaged by their owners to make sure they didn’t fly away.

RWCA’s team concluded that the disabled cranes could not be reintroduced into the wild as they would not survive there.

“So we needed to find a different solution to the problem”, says Mr. Niyomwungeri. 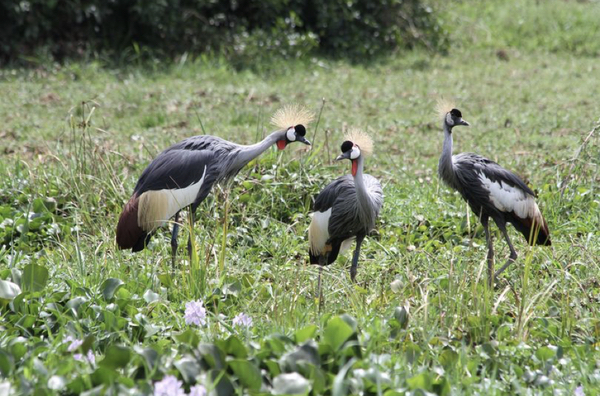 That’s how Umusambi village, a 21-acre nature reserve for rescued cranes that can no longer fly, was born.

The Rwanda Wildlife Conservation Association negotiated for land with the government to rescue disabled cranes and they were granted a 21- hectare wetland reserve just outside of Kigali, Rwanda’s capital city.

Today, Umusambi village is a safe haven to over 70 cranes that are catching the eye of visitors with their unique yellow crown feathers. It is worth noting that other bird species have also chosen the village as their safe home.

In addition to providing cranes with an enriching environment, the village has become a conservation hub where visitors can learn that one of Africa’s striking birds is among its most endangered.

The village is now providing a unique eco-tourism attraction which is part of the government of Rwanda’s effort to promote tourism through “VISIT RWANDA” campaign.

A family visiting Rwanda from USA says that his family was grateful to spend a day in a beautifully restored marshland, walking, bird-watching and learning about the endangered grey crowned cranes.

“Our kids learned about the importance of the marshland ecosystem and planted a native tree that we look forward to visiting again in the future”, said Andrew Summers. 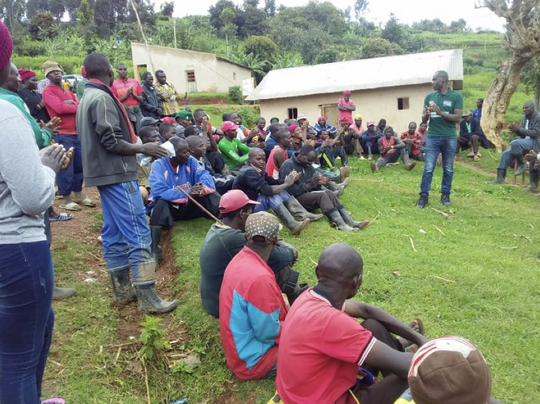 The strategy that the Rwanda Wildlife Conservation Association implemented to work with communities has also been a key to their successful conservation project.

“Understanding that poverty is the main reason why people poach the cranes has helped us to take communities on board our mission by working with them to create conservation jobs and other opportunities for people to find an alternative livelihood,”says the 36-year-old renowned conservationist.

Near Rugezi marshland, more than 50 men and women are working on a hill to make a room for the cultivation of fodder grass to feed their livestock.

“We have been sensitized to stop cutting grass for our livestock in the marshland and are now planting our own”, says one woman in her 30’s when asked.

These men and women are working for ‘fodder project” that is run by RWCA.

Dr. Nsengimana said that his team is working closely with the community to expand its fodder grass project where members of the community will be able to access grass for their livestock without entering the marshland where grey crowned cranes like to breed.

While Umusambi village is home to only disabled cranes that cannot go back to the wild, the organization reintroduces healthy cranes back to the wild in Akagera National Park.

“So far, 242 cranes have been removed from captivity, of which 166 have been reintroduced into Akagera National Park,” said Dr. Nsengimana.

But before they are introduced in the park, healthy cranes are taken into the organization’s purpose-built quarantine facility where they undergo a complete physical exam at which samples are collected and analyzed for different diseases.

Dr. Nsengimana noted that his team respond and treat any crane that is found with a disease that could be harmful to its health once reintroduced but could be a threat to other birds or animals in the wild.

Once the cranes are clear of disease and the quarantine period is over, they are moved to the rehabilitation site at Akagera National Park.

The rehabilitation facility gives the cranes time to relearn or remember behaviors such as foraging that they will need to survive in the wild as well as re-grow feathers that were cut in captivity. 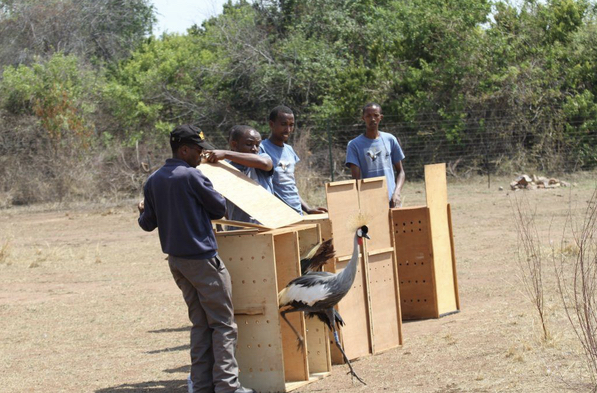 Jean Ferus Niyomwungeri and his small team of colleagues are carrying a number of wooden crates closer to a lake in an area that was fenced off from the lions, elephants and other wild animals moving about Akagera National Park.

The Community Conservation Manager removes the door from one of the crates and immediately step aside. Three tall grey crowned cranes rush out and run boldly into the wild, their natural habitat.

Mr. Niyomwungeri says that the exercise is part of the post-release monitoring of healthy grey crowned cranes back to the wild.

The work doesn’t stop here as the organization still have to evaluate their rate of survival over a period of time.

The dispersal of cranes throughout the park and its surroundings as well as the cranes ability to reproduce is also part of the RWCA’s post release monitoring exercise.

Mr. Niyomwungeri says that RWCA has recently strengthened its post-release monitoring by fitting GPS tags they are reintroduced to their natural environment in the park.

According to Dr. Nsengimana this exercise enables the team to better understand the dispersal and behavior of reintroduced cranes. 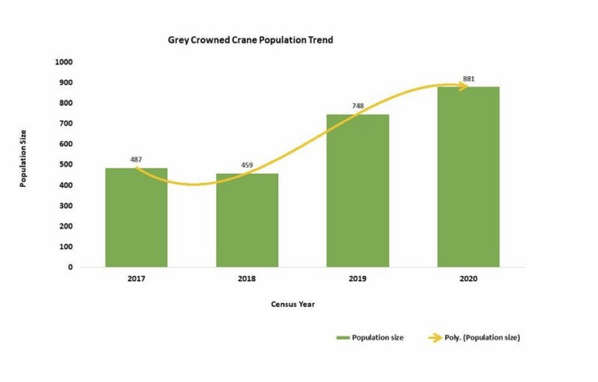 Rwanda Wildlife Conservation Association is aware of the fact that Rwanda has a small population of grey crowned cranes that were facing a rapid decline early 2010 and since 2017 it is carrying out regular surveys to track the change in population.

Dr. Nsengimana said that in 2017, they completed the first ever national census of grey crown cranes to serve as a baseline and to increase the accuracy of the previous estimations.

“We have been able to repeat the census every year so far and hope to track the population trends over time to assess the impact of our work and better target our interventions” noted Dr. Nsengimana.

Dr. Nsengimana is delighted by the organization’s cranes conservation progress and plans to collaborate with other East African countries of Uganda, Burundi, Tanzania and DRC to better monitor cranes that fly across the region.