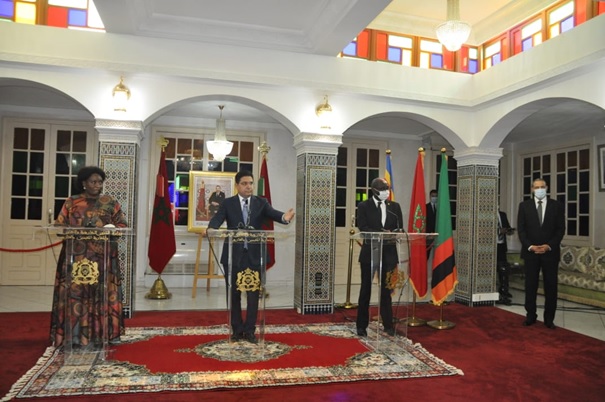 The continued opening of Consulates General of friendly and brotherly countries in Laâyoune and Dakhla is the fruit of the wise African policy of His Majesty King Mohammed VI,  said on Tuesday October 27, 2020, Minister of Foreign Affairs, African Cooperation and Moroccan Expatriates, Mr. Nasser Bourita.

“The Moroccan diplomacy is reaping the fruits of the African policy of His Majesty King Mohammed VI,” said Mr. Bourita during a joint press briefing with Eswatini’s Minister of Foreign Affairs and International Cooperation Thulisile Dladla, and Secretary General of the Ministry of Foreign Affairs of Zambia Chalwe Lombe, after the inauguration of the consulates general of the two countries in Laayoune.

Mr. Bourita noted that, over the past twenty years, this royal policy has always relied on initiative, solidarity and the obligation to move from words to action, in addition to establishing “fruitful partnerships that benefit everyone”.

This Royal Vision has made Morocco “a credible partner, with a strong presence within the African Union and African institutions as a whole,” he said.

Today, “our partnerships are no longer limited to the neighborhood of the Kingdom”, but rather extend to the countries of the extreme south of the continent and are based on the same principles of cooperation, credibility and friendship, added the Minister, noting that many states consider Morocco as “a reliable partner”.

To date, 15 countries representing the various regions of Africa (West, East, Central and Southern) have opened consulates general in Laâyoune and Dakhla, Mr. Bourita said, indicating that this momentum will continue.

Mr. Bourita also noted that the inauguration of the consular offices of Eswatini and Zambia is part of this African policy of the Sovereign and its openness to the southern African region, recalling, in this regard, the visit of His Majesty the King to the Republic of Zambia in February 2017, which marked a “turning point” in historical bilateral relations.

He explained that this dynamic “goes in the direction of increased support for the Moroccan identity of the Sahara, a reality which is neither negotiable nor debatable”, stressing that the Sahara is Moroccan “by law, by history, by the will of its population and by the growing support of the international community and the friends of Morocco”.

False allegations and moves by other parties will not change this reality, the Minister insisted, noting that the local population is enjoying the tangible impact of the sustained development process taking place in the Moroccan Sahara.

The inhabitants of the region manage their own affairs in a democratic manner, which reinforces the legitimacy and the soundness of the issue of the Kingdom’s territorial integrity, said Mr.Bourita, noting that the United Nations recognizes the role of elected representatives of the southern provinces as legitimate interlocutors and representatives of the population.

He recalled that the Republic of Zambia and the Kingdom of Eswatini have benefited from the medical aid provided by Morocco, upon the instructions of His Majesty the King, in order to help a number of African countries in the fight against Covid-19, highlighting the importance of this “royal gesture of solidarity” in strengthening African cooperation.