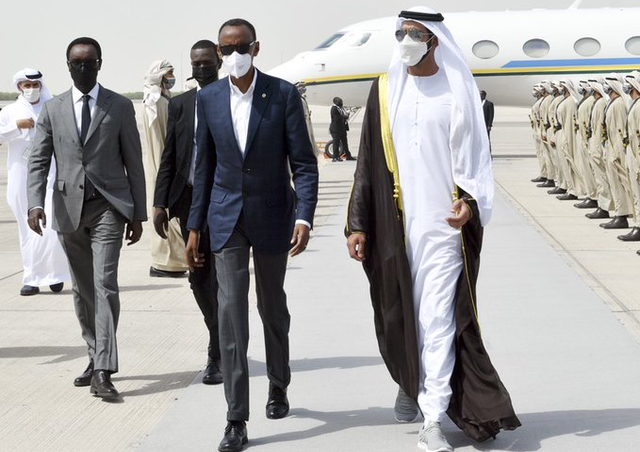 During his state visit, President Kagame will pay his respects to Sheikh Khalifa bin Zayed Al Nahyan and offer his condolences to Sheikh Mohamed Bin Zayed, the current President of the UAE.

Mohamed Bin Zayed was elected the UAE third President a day after his brother’s death Sheikh Khalifa bin Zayed Al Nahyan who served as the second President of the UAE from 2004 until he passed away on 13 May 2022.

·         In March 2018, Sheikh Abdalah Bin Zayed, UAE Minister of Foreign Affairs, opened the Embassy of the UAU to Rwanda.

·         In June 2018, H.E. Mr. Hazza Alqahtani presented his Letters of Credence as the first resident Ambassador of the UAE in Kigali, to the President of Rwanda H.E. Paul Kagame. This important sign highlighted the development of diplomatic relations between Rwanda and UAE of that year.

·         In February 2019, the President of Rwanda led a ministerial delegation and attended the World Government Summit 2019 in Dubai.

In 2018, the United Arab Emirates had seven investment projects registered at the Rwanda Development Board estimated at total value of USD 115.4 Million USD and expected to create 845 jobs.

The projects were registered in the following sectors; Mining, agro-processing transport & logistics as well as Accommodation & food services (tourism).

The two countries have signed the following Agreements:

·         Agreement between the Republic of Rwanda and the United Arab Emirates for the Avoidance of Double Taxation and the Prevention of Fiscal Evasion with Respect to Taxes on Income and on Capital.

·         Memorandum of Understanding for exemption from entry visas.

·         Memorandum of Understanding to provide scholarships.

·         Memorandum of Understanding to provide vocational training for 100 women in the field of hospitality and tourism.

In June 2019, H.E Nasser Bin Thani Juma Al Hamli, Minister of Human Resources and Emiratization conducted a working visit to Kigali during which the Memorandum of Understanding in the Field of Manpower / Labor Cooperation between the Government of the UAE & the Government of Rwanda was signed.

In January 2020, the President of the Republic of Rwanda led a ministerial delegation and attended the Abu Dhabi Sustainability Week.

·         In 2019, the UAE through its Embassy in Kigali and Rwanda Development Board has conducted a three days training benefiting 100 Rwandan women. The program entitled; “Empowering 100 Women Future Leaders in Hospitality Excellence” was conducted by experts from the Emirates Academy of Hospitality Management. The training was focusing on excellence in the hospitality industry, with an aim to impart world-class skills in tourism and hospitality through capacity development.

·         Since 2018, 20 male and female students from Rwanda received UAE Government scholarships at the UAE University in the disciplines of: Architecture, Mechanical Engineering, Electrical Engineering, Biology, Biochemistry, and Computer Science.

·         For the last at least 10 years, the UAE through the Khalifa Bin Zayed Al Nahyan Foundation has also been fully funding the Islamic Secondary School for Sciences & the Islamic Cultural Center. (End)