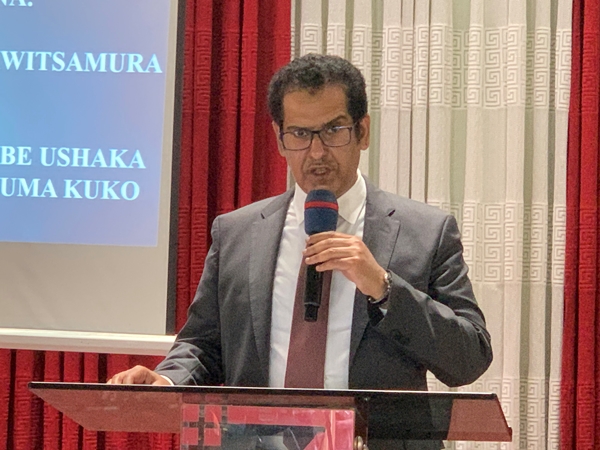 Kigali, Gikondo: H.E Hazza Alqahtani today in Gikondo Church Service at the Free Methodist Cathedral focused on Tolerance & the Abrahamic House of Fraternity in the UAE. Read below his message:

• A good morning to you all members of this congregation. I want to take this opportunity to sincerely thank Bishop Samuel Kayinamura, Head of the Rwanda Protestant Council and the Secretary General Reverend Dr. Samuel Rugambage, for giving me the privilege to participate in today’s Sunday church service with you all. I would also like to give a warm thank you to the Free Methodist Church Senior Pastor Benjamin Kayumba and each one of you in the congregation for having me here today and for the warm welcome.

• It is an honor for me to take this moment to share with you my country’s legacy of tolerance, acceptance and co-existence between people of different faiths. 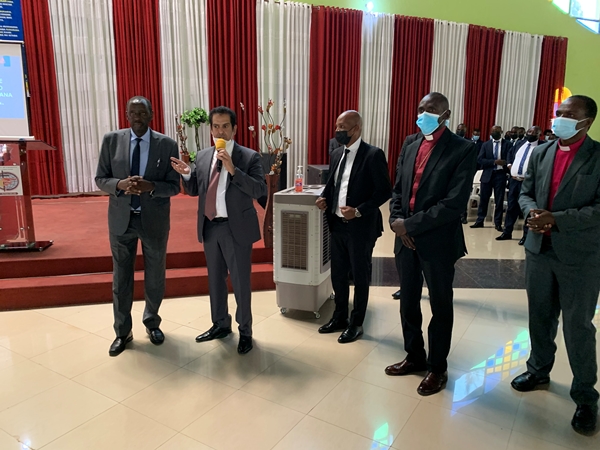 H.E Hazza Alqahtani with Pastors from the Free Methodist Church.

• The UAE is a constitutional federation of seven emirates that include Abu Dhabi the capital and Dubai the economic capital.

• There are over 200 nationalities living in harmony & co-existence in the UAE today and every major religion is practiced. The expatriate community outnumbers the population of UAE

Tolerance in the UAE:

• The founding father of the UAE, Sheikh Zayed, may God rest his soul in peace; was tolerant and called all people to be tolerant themselves, to accept others and coexist with them regardless

of color, religion or beliefs. He did this using his compassionate fatherly style, wisdom, and gentle words done with ease and spontaneity to reach the hearts and minds of listeners.

• Diversity, openness, religious tolerance all align with Emirati adherence to moderate Islam, a guiding principal of the UAE’s national identity since 1971.

• As emphasized by the Crown Prince of Abu Dhabi H.H. Mohammed bin Zayed Al Nahyan, the UAE is a nation of tolerance, peace, cultural diversity, and coexistence.

• Ministry of Tolerance was created in 2016 and the UAE declared 2019 as the Year of Tolerance & issuance of Document on Human Fraternity.

Visit of His Holiness Pope Francis to the UAE:

• On February 4th, 2019 His Holiness Pope Francis, head of the Roman Catholic Church and spiritual leader to 1.2 billion devotees, arrived in Abu Dhabi, becoming the first pontiff ever

to visit the Arabian Peninsula.

Fraternity for World Peace and Living Together at the Founder’s Memorial in Abu Dhabi.

• The Document of Human Fraternity calls for an end to the use of religion as justification for war, violence and harm and opposes extremism in all forms.

• His Holiness Pope Francis said and I quote…. “This Visit to the United Arab Emirates belongs to the “surprises” of God. So let us praise Him and His providence, and pray that the seeds sown

may bring forth fruits of peace”. End of quote

The Abrahamic House of Fraternity

• The Abrahamic religions—Judaism, Christianity and Islam—are united by the belief in one God and all three share in a history connected to the patriarch Abraham.

• In an increasingly polarized world, the UAE proposed a dedicated space for inter-faith dialogue. Religious tolerance and the embrace of diversity have been a part of the UAE story from the very beginning. And following this, last year I hosted at myResidence, an Inter-Faith Iftar that brought together the leaders of the different religious faiths in Rwanda including His Grace the Cardinal, members of the Diplomatic Corps and the former Minister of Foreign Affairs Dr. Richard Sezibera.

• The UAE unveiled plans for the Abrahamic House of Fraternity on September 20th 2019 in New York alongside the UN General Assembly.

• The Abrahamic Family House will be an interfaith complex currently in development in Abu Dhabi, a representation of the Document of Human Fraternity which will feature a church, a

mosque, a synagogue and a secular welcome center on one shared site. Currently, in development, the project’s anticipated completion date has been set for the year 2022.

• At the Abrahamic House of Fraternity, each of the three houses of faith, a mosque, a church and a synagogue, will stand at the same height to symbolize equality. The design will highlight the often overlooked similarities between the three faiths and their corresponding architectural traditions.

• The Abrahamic House of Fraternity will act as a place for religious worship as well as a space for exhibitions, programs, conferences and inter-faith dialogue initiatives.

• The aim is to be in support of global and regional stability, increased collaborative opportunities of all kinds, expanded economic prosperity, strengthened international relations, and countering violent extremism in all forms, promoting cross-cultural education and promoting peace.

I would like to once again give a special thank you to the leadership of the Rwanda Protestant Council and the church leaders here at the Free Methodist Cathedral for this opportunity to share Sunday church service with you all. Thank you. (End)