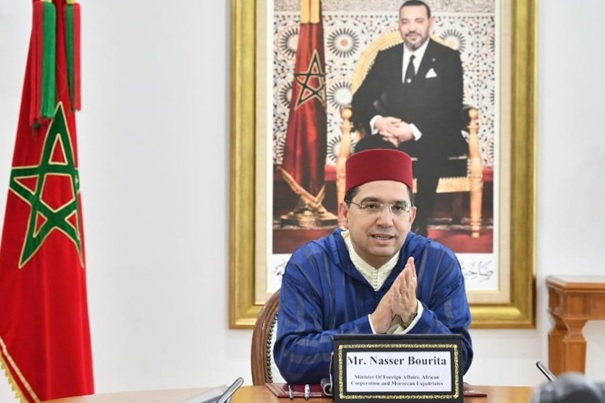 During this meeting, MFA Bourita and Mrs. Marsudi praised the excellent bilateral relations whose 60th anniversary was celebrated on April 19 this year.  According to the two Ministers, these bilateral relations were marked by a regular and friendly dialogue which they agreed to further strengthen, particularly in the context of the coronavirus pandemic.

The two officials agreed on intensifying political consultations and developing economic cooperation between Morocco and Indonesia through the implementation of the agreements signed during the 2nd session of the joint committee held in Jakarta in October 2019.

They also discussed the importance of promoting triangular cooperation and encouraging interaction between business communities of the two countries, especially in the fields of agriculture, mining and tourism.

With a view to holding the 3rd session of the joint committee, scheduled before the end of 2021, MFA Bourita and Ms. Marsudi underlined the need to identify future draft agreements by capitalizing on the potential and complementarities of the two countries.

The two Ministers also stressed the importance of dialogue between Morocco and Indonesia in international forums on issues of common interest.  In this regard, Marsudi welcomed Morocco’s support for the efforts of ASEAN and Indonesia to find a way out of the crisis in Myanmar, notably the holding of a Special ASEAN Summit on the question, in Jakarta.