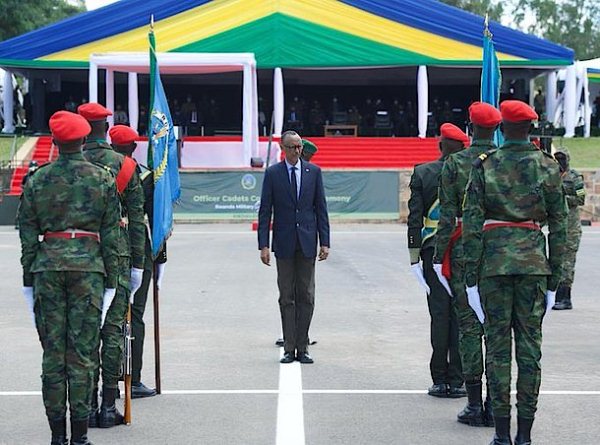 Gako: President Kagame who is also the Commander-in-Chief of the Rwanda Defence Force – RDF has on Monday commissioned 721 new officer cadets who will be joining the Rwanda Defense Force. The event took place at Gako Military Academy in Bugesera District, Eastern Province.

In his address of the day, President Kagame reminded that transforming our nation towards continued development requires a professional, strong, and disciplined army. President Kagame commended the RDF unique history of working closely with the citizens, which has resulted into the development of the nation. He further encouraged the new officers to continue in that line and to remain steadfast to this objective of transforming our country.

The 721 officer cadets who graduated today include 71 females. 209 of them jointly pursued military training and bachelor’s degrees in social and military science, general medicine as well as mechanical and energy engineering.

Another category of 506 cadet officers did a one-year military training course, including 347 RDF non-commissioned officers and 159 civilians who joined with a bachelor’s degree. Six of the graduated cadets completed training in different countries including Belgium, Kenya and Sri Lanka. (End).